A Pocketful of Eyes 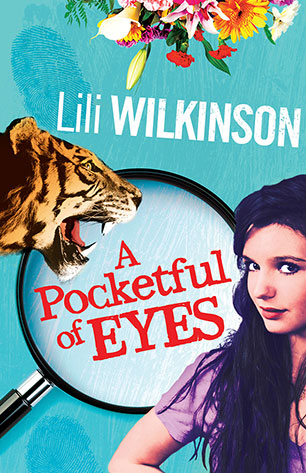 When a dead body is discovered at the Museum, Beatrice May Ross is determined to use her sleuthing skills to solve the case. Sharp, sassy YA crime-fiction, with a dash of romance and a splash of funny.

Bee is in her element working in the taxidermy department at the Museum of Natural History, but her summer job turns out to be full of surprises:

A dead body in the Red Rotunda. A mysterious Museum benefactor. A large stuffed tiger in the Catacombs. A handsome boy with a fascination for unusual animal mating habits.

And a pocketful of glass eyes.

Can Bee sift through the clues to discover whether her mentor really committed suicide . or is there a murderer in their midst?

'an entertaining introduction to the genre of crime fiction. the ending is ultimately satisfying.' Carousel
More books by this author

Lili Wilkinson was born in Melbourne, Australia, in the front room where her parents still live. She was first published when she was twelve, in Voiceworks magazine. After studying Creative Arts at Melbourne University, Lili worked on insideadog.com.au, the Inky Awards and the Inkys Creative Reading Prize at the Centre for Youth Literature, State Library of Victoria. She now spends most of her time reading and writing books for teenagers. She's won awards for the writing part, but not the reading, unless you count the stopwatch she won once in the MS Readathon.

Bee, a prospective Year 12 student, manages to continue with her job as an assistant taxidermist at the Melbourne Natural History Museum. She works closely with her supervisor Gus as they develop and prepare a new display for a Museum show. Out of the blue, Toby, a new assistant is employed and his knowledge of the animal kingdom is not only well grounded but absolutely quirky. The plot continues but turns savagely when Gus is found dead in the Red Rotunda at the Museum. Is his death a suicide or murder? After working with Gus for so long, Bee is not only emotionally upset but also angry that such a caring man could meet such a fate. As Bee sets out to uncover the truth of this event, Toby joins in and adds some spice to the investigation and work time. Teen love throws many a surprise to the participants. Bee’s latent adolescent feelings begin to surface after a short encounter with Toby, a character with a dubious, yet well meaning background. The scene with the stuffed tiger adds a wonderful tension to the plot. The issue of friendship is wonderfully covered in the novel. The rejection Bee displayed to her Year 11 friend Maddy was the result of a common teen theme, a boyfriend being stolen. Bee’s eventual resolution to this issue is a partnership of her mother’s advice and the need for a personal and caring companion to front an upcoming Year 12. A detective novel in the mould of Erin Brockovich, A Pocketful of Eyes tugs the reader not only through the dimly lit underground catacombs of a museum, but also through a web of clues to try and discover the details of a death at the museum. The suspense is very well managed by the author and the final resolution is very well portrayed.Trevor Dangerfield, Elisabeth Murdoch College, VIC

Hooray – a book set in Melbourne! Set in the Museum of Natural History this book centres around the taxidermy department, and the mysterious death of the department supervisor. Our heroine, Bee, on summer placement in the department, has developed a quietly comfortable relationship with her elderly supervisor who seems to live for his work. When, following a day of out-of-character activity his body is found, Bee, a keen reader of crime fiction, fancies that something is seriously amiss and determines to discover the truth. Add into the mix a good looking but mysterious young colleague, whose flirting Bee finds both distracting and attracting and a mother obsessed with computer games and her ‘Celestial Badger’ boyfriend and you have the ingredients for a great Senior novel.

I enjoyed the detail in this book. The author had clearly spent her research time well, which enabled the creation of believable characters and settings. I’m very fond of visiting the Melbourne Museum myself and getting a glimpse, albeit fictional, into the backroom workings of a taxidermy department was fascinating. The book is also full of interesting and quirky natural history facts – an added bonus to a good read. I will certainly be recommending this book as holiday reading to some of our senior studentsDebbie Williams, Mountain District Christian School, VIC

Bee is a hard working science buff using her time between grade 11 and 12 to work at The Museum of Natural History. She loves her job working with the preparation of dead animals for show, working alongside her team leader Gus. The arrival of a mysterious and good looking stranger, teamed with a dead body, some senior museum staff who obviously have something to hide and a sad, tearful old man as well as a mother with more personality and creativity than you can imagine and Bee’s summer descends into a tumult of frustrating, often exciting and dangerous code-breaking, detective work. Bee is convinced the dead body is not a suicide and plans to work out who dunnit!

Like the heroines of her childhood in the Nancy Drew and Trixie Belden series, Bee works hard to try and solve what she believes to be a case of foul-play, hitting brick walls, unsolved issues and a history stretching back many years. A Pocketful of Eyes keep you guessing until the end, with many twists, turns and dead ends. The main characters are believable, likeable and interesting. The secondary characters are every bit as believable as Wilkinson attempts to portray them, supporting the main story and bringing depth to the plot. The reader is able to understand Bee’s motivation, frustrations and ultimately wants her to succeed in solving the mystery of A Pocketful of Eyes. This book would be most suitable for teenage girls. There is a little romance throughout the story as well as the ‘who dunnit’ element and a strong female lead character who would ultimately be inspiring to young women everywhere. This is a great book. I read it in one sitting and would recommend it to good female readers everywhere.
Francesca Tulk, TAS