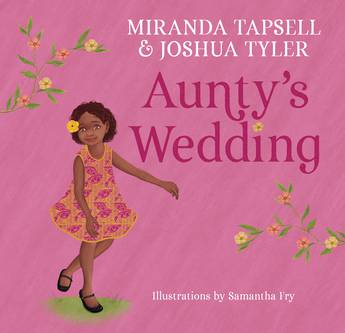 A Tiwi-Island girl prepares for Aunty's wedding with help from her maningawu in this vibrant picture book by the popular actor and writers of Top End Wedding and the highly acclaimed illustrator of Alfred's War.

Everyone on the island is getting ready for Aunty's wedding. Maningawu puts on her best hat and I can wear a wurrijinga in my hair. Lucky! We all dress up, but I still don't understand. Why do people have a wedding?

Miranda Tapsell was born in Darwin and her people are the Larrakia and the Tiwi. She grew up in Kakadu National Park and shot to fame after her role in the film The Sapphires. Miranda is also known for her work on the TV shows Love Child, Cleverman and Wolf Creek, among others. She co-wrote, produced and starred in the box office hit Top End Wedding.

Joshua Tyler grew up in the Barossa Valley, on Peramangk country. He is an award-winning screenwriter, playwright and actor. Joshua co-wrote Top End Wedding with Miranda Tapsell and has written for a number of children's TV shows including Tashi and 100% Wolf. He currently lives on a hobby farm in rural Victoria with his wife, two kids and lots of native animals.

Samantha Fry grew up in the Northern Territory and lives in Darwin. She is descended from the Dagoman people from Katherine and as a child lived in remote communities across the Top End. Her first book, Alfred's War, written by Rachel Bin Salleh, was short-listed for the Premier's Literary Awards and the Speech Pathology Awards.