It's True! Burke and Wills forgot the frying pan (12) 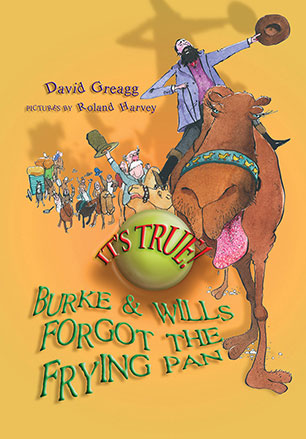 An accessible, humorous retelling of Australia's most stirring stories, detailing the accomplishments and personalities of the brave, obsessive and sometimes foolish men who mapped Australia.

Psst! It's true! This is the best book on EXPLORERS you'll ever read! They struggled up mountains, trekked across deserts, marched through mudflats. Some found rivers, some lost themselves, others lost their tempers.

Could you have solved the Riddle of the Rivers like Sturt? Would you have crossed Australia waving a brass-handled sword like Leichhardt? On your next bushwalk, will you remember the frying pan? In this book you'll discover the marvellous men that mapped Australia: the brave, the bold, the famous and the foolish. Mesmerise your mates with ace adventures and extreme exploits
More books by this author More books in this series

David Greagg was born in Perth but has lived in Footscray, Melbourne, since 1975. His university studies included Science, Maths, English and medieval languages. As a result, he has been employed as just about everything (from company accountant to travelling comedian) but currently teaches Maths, Chemistry and Literacy at a Melbourne secondary college. He has had poetry published before but this is his first book.

Roland Harvey is one of Australia's best-loved illustrators. In 1978, he established Roland Harvey Studios and began designing and producing greeting cards, posters and stationery with a distinctly Australian flavour. Ventures into publishing quickly followed. Some of his best-loved books include My Place in Space (with Joe Levine), Burke and Wills, The First Fleet and Sick As (with Gael Jennings). His recent books include the best-selling At the Beach and In the Bush and his illustrations are featured in It's True

1 Messing about in boats Flinders and Bass

2 Lost in the Blue Mountains Blaxland, Wentworth and Lawson

3 Looking for the Inland Sea Oxley

4 The Bushman and the Sea Captain Hume + Hovell

5 Still looking for the Inland Sea Hume and Sturt

6 It's my country and I'll do the exploring, thank you Mitchell

8 Blundering in the bush Leichhardt

9 Dying in the desert Burke and Wills

10 Across the continent and home safely Stuart

Why did they do it?

Live to tell the tale