The Cat at the Wall 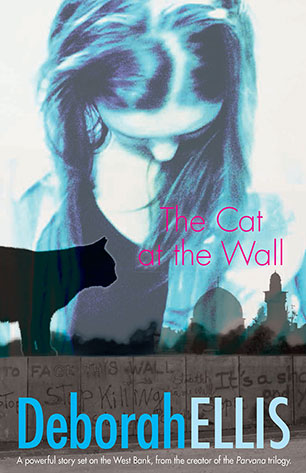 If you were given a second chance at life, would you have the courage to do the right thing? A captivating novel set on the West Bank, The Cat at the Wall combines Ellis's respected and unflinching realism with a hint of engaging magic.

On Israel's West Bank, a cat sneaks into a small Palestinian house that has just been commandeered by two Israeli soldiers. The house seems empty, until the cat realises that a little boy is hiding beneath the floorboards.

Should she help him?

After all, she's just a cat.

It turns out that this particular cat is not used to thinking about anyone but herself. She was once a regular North American girl who only had to deal with normal middle-school problems - staying under the teachers' radar, bullying her sister and the uncool kids, outsmarting her clueless parents. But that was before she died and came back to life as a cat, in a place with a whole different set of rules for survival.

When the little boy is discovered, the soldiers don't know what to do with him. Where are the child's parents? Why has he been left alone in the house? It is not long before his teacher and classmates come looking for him, and the house is suddenly surrounded by Palestinian villagers throwing rocks, and the sound of Israeli tanks approaching. Not my business, thinks the cat. Then she sees a photograph, and suddenly understands what happened to the boy's parents, and why they have not returned. As the soldiers begin to panic, disaster seems certain, and she knows that it is up to her to defuse the situation. But what can a cat do? What can any one creature do?
More books by this author

Deborah Ellis has achieved international acclaim with her courageous and dramatic books that give Western readers a glimpse into the plight of children in developing countries. She has won the Governor General's Award, Sweden's Peter Pan Prize, the Ruth Schwartz Award, the University of California's Middle East Book Award, the Jane Addams Children's Book Award and the Vicky Metcalf Award. A long-time feminist and anti-war activist, she is best known for the Parvana trilogy, which has been published around the world in seventeen languages, with more than a million dollars in royalties donated to Street Kids International and to Women for Women, an organization that supports health and education projects in Afghanistan. In 2006, Deb was named to the Order of Ontario.

Yet another engaging text by Deborah Ellis, The Cat at the Wall is sure to capture the imaginations of students everywhere who will be interested in the voice of the lead character, which just happens to be a cat.

Clare, now reincarnated as an animal, was previously a 13-year-old American schoolgirl who now finds herself living a new life in a cat’s body. She no longer lives in the United States of America but is found wandering the streets of Israel's West Bank. Ellis takes her audience on a journey to a different time and place exploring everyday life in the Middle East through the eyes of a proud and feisty feline.

Unlike her Parvana series, Ellis does not so much focus on the issues of war taking place in this foreign land but rather on the lessons learnt by the teenager, who had been quite rebellious in her human body and now perceives her past errors. The audience gain a sense of setting through the eyes of the cat and understand the daily struggles of the animal. As with most novels set in the Middle East, readers gain a sense of unrest and feel the tension between characters, however, we gain most knowledge and understanding from the teenage protagonist who seems rather comfortable in her cat's body.

This text would work best for a middle school audience who are learning about issues and tensions in the world but who are still interested in the magic of what "can be" in a fiction novel. Teachers can definitely use this text to look at the ways in which voices are designed within literary works.
A highly recommended read if you like Ellis' stories as this is something that strays from her norm and is therefore unlike anything else she has written so far.
Tanya Davies, English and ESL Teacher, International Co-ordinator, NSW

Having always enjoyed Ellis’s books, I looked forward to getting and reading her latest book. This is the first book I can remember reading in which I have not liked the main character. She is selfish and mean. Clare dies when she is run over by a truck and comes back to life as a cat. She sneaks into a Palestinian house taken over by Israeli soldiers. A Palestinian boy is hiding in the house unaware that the rest of his family has been killed.
As Clare forages for scraps in the house and thinks about helping or not helping the little boy, she reminisces on her life as an adolescent schoolgirl. She describes instances of her mean-spiritedness, selfishness seemingly without any remorse or regret. Even as a cat, she hides a vital piece of equipment from the soldiers. This is why I didn’t like the main character, Clare.
I did find a hero in the story: Ms Sealand, Clare’s new teacher. She is firm and fair and her punishment is copying out Desiderata. She also cares about Clare’s character. This aspect of the story highlights what I’m sure many teachers face today: parents thinking their children are undeserving of detentions or low grades meted out. However I did enjoy the story and in the end, Clare as a cat performs one redeeming act.
Our school is a PB4L school and this book would be a great read to start discussions about bullying. I will be recommending it to our 9-13 year olds.
Nova Gibson, School Librarian, Massey Primary, NZ

Although written in a first person narrative, this book would be an excellent book to read aloud in an upper primary or lower secondary class, or used as a reader’s circle set for independent reading.

Clare is a thirteen year old American girl, part of the in crowd at school and typical in every way, except she is dead. She has been reincarnated as a stray cat living on the streets of Bethlehem on the West Bank. Throughout the easy going narrative, Clare tells the story of her last year at middle school and the events leading to her death. Interspersed with this, is her account of a particular day in the Middle East, and her incredible act of daring to diffuse a volatile situation.

The characterisation of Clare is matter of fact and honest, and as a teenager she is not particularly very nice. As the reader, we don’t feel pity for her, despite her unusual situation, and the narrative is not melodramatic, considering the war setting. As a cat and in search of food, Clare enters a house with two Israeli soldiers, who have taken possession of the house to spy on the Palestinian neighbourhood. It is the cat who subsequently discovers a small boy hiding in the floorboards of the house - what will the cat do next? Due to its Middle East setting, the book can provide students an introduction to the conflict and a discussion about what everyday life would be like within a war zone.

The secondary narrative involving Clare and her volatile relationship with her teacher and the detention she regularly receives, would also provide great class discussion and opportunity for character descriptions of both Clare and ‘Ms Zero’.

An interesting device the author uses within the narrative is the poem Desiderata, a 1927 prose poem by American writer Max Ehrmann. ‘Desiderata’ stands for ‘desired things’, and it is known as a poem of happiness, but in the book Clare refers to it as the poem of punishment. It would be rewarding for students to learn the poem in its entirety, discuss its meaning and to also create their own poem of desired things.
Beth Ashworth, Librarian