Tashi and the Stolen Bus 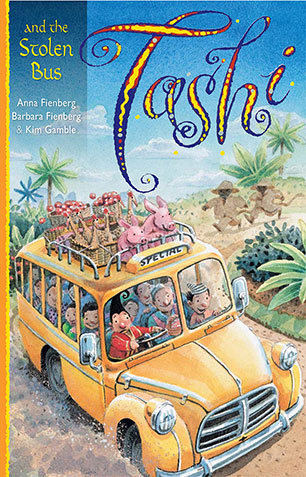 In the thirteenth book in the Tashi series, Tashi has to get behind the wheel to outsmart the demons and solve the mystery of a thief in the night.

'The demons are crazy for buses!' said Can-Du. 'And when I wouldn't hand this one over, they kidnapped my son.'

What will Tashi do when the demons sneak onto the new bus going to market? How will he find Little Can-Du? And when things are mysteriously disappearing from the village, it's up to Tashi to catch a thief red-handed.

See how scared and brave our Tashi can be - and what exciting stories he has to tell.

'Energetic and well-paced, the 13th book penned by the mother and daughter team is another winner. Gamble's illustrations are consistently entertaining and give the book added dimension.' - Sunday Age
More books by this author More books in this series

Anna Fienberg is the author of many popular and award-winning books for children of all ages. Her mother, Barbara Fienberg, an ex-librarian, is chief plot-deviser for the Tashi books. Kim Gamble has done splendid illustrations for many of Anna's books, and for books by other authors.

Make your own Tashi stand

The pictures in this story book are just beautiful. The illustrations really paint a wonderful picture of the country side, villages, the people who live here and of course Tashi and the dragon. I really enjoyed reading this story to the children in my kindergarten class as it was interesting, funny and told a tale of great courage and how important it is to help others. Once Tashi Met a Dragon begins with Tashi riding on a white tiger to the top of a mountain to see why the dragon is not sending rain down into the village. The legend states that once a year the dragon will send smoke and thunder down the mountain and then the rain would follow. But there was no rain, the skies were blue and the village was becoming very dry as there is no water in the creeks, so the people of the village are very hungry. No one has ever seen a dragon but Tashi believes he is there and when he meets the dragon, he discovers a very sad and angry dragon, who just wants his mum to wake up. The dragons mum is under a demon spell and no matter how hard the dragon tire he cannot wake her. Tashi and the dragon need to work together to help each other. This is a great book about helping others and making friends.
As a class we made our own dragons and displayed them in the class room. We also brainstormed ideas about helping other people in need in our community and how important helping others can be. I would recommend this story for children aged 4 and up.
Claire Evans, Sun Kids Palmwood, Kindergarten

A first glance at this book alerts you to a wonderful story to come. This hardcover, with beautifully faded, the almost sepia-like colours, contrasted with the sparkle of the book’s title and the gorgeous green and yellow dragon, draws you in.
Opening the cover to reveal the lusciously illustrated end-papers had this reader deliberating whether to further savour the richness of the pictures or whether to be getting on with reading the story. The title page too gives more hints of the village setting and so we turn the page to meet Tashi and his Grandmother pondering about the dragon who lived over the mountain and far away.
The concept of drought needing rains to restore the landscape is one that most young readers would know from their own life experiences, and this point could be the basis of discussion even before introducing this wonderful Tashi story.
The sheer pleasure of being engrossed in an imaginative and well-written story is enough reason for this book to be incorporated into an early child years classroom. This special book lends itself to a number of concepts and language structures for further exploration by the developing reader. Drought, journeys, local landscape, stories that Tashi is familiar with, family; and then the language to convey past-tense, direct speech, adjectives, similes, - all of which contribute to the climax of the story, even after meeting the dragon who ate his own sister! I love the way the old mother dragon sends “from her dragon mouth wisps of dragon words…into the air and they bloom into black balloons that burst……and with the words came the lashing whooping roaring rains….”
This is such a beautiful, magical encounter with Tashi – thank you to two fine authors, Anna and Barbara Feinberg and an intuitive illustrator, Kim Gamble.
Pauline Dawson, Teacher, QLD

Here is another Tashi adventure, written by the Fienbergs and beautifully illustrated by Kim Gamble.
One day Tashi learns about how the dragons living on the mountain usually bring the rains. However, this year the rains have not come. Tashi meets a tiger who explains that the old dragon is asleep and the young dragon is causing fires because he hasn’t learned how to manage flames. The tiger takes Tashi up the mountain to meet the lonely young dragon. Tashi encourages the young dragon to sing a song which wakes the old dragon. The old dragon then shows her children how to use dragon words to make rain. This is how Tashi is involved in breaking the drought and bringing rain to his home village.
This would be a delightful story to read to Grade 1-4 students as part of a unit on dragons, legends, weather or traditional Asian lifestyles. For example, the endpapers at the front of the book contain a wealth of detail about how the local people feed themselves, fishing or cultivating fields, using animals to plough the ground or to travel. Alternatively, you could create other legends to explain how thunder is made, or a rainbow. Using the Australian context, students could may draw what a drought looks like and compare this with a picture of what it is like after the rains have come.
A Gray, Glen Huon, TAS

As a fan of Tashi, I was looking forward to reading this book. The first thing to grab your attention is the illustrations: an inviting point for young readers of picture books. This story sees Tashi off on an adventure to meet a fierce dragon to enable the rains to fall again. A cross between an adventure story and a legend, the fact was that the village people believed that the dragon sent the rains every year to’ wash away the dullness’ and to ‘make the air sparkle like diamonds.’ As the year draws on the rain fails to come. The crops are dying and the animals are thirsty. While helping a thirsty tiger, Tashi finds out that the old dragon is not the problem it is a young dragon. Tashi sets out to see if he can convince the dragon to send rain. He finds a young dragon that is very sad. The young dragon is angry with everyone because he is lonely as his mother won’t wake up and he ate his sister.
I have used this book as an example for my year six class when writing picture books for younger readers. It has a good story line, is descriptive in language that it uses and has beautiful illustrations.
Recommend for lower primary as a read out loud and middle primary could read themselves. As I have, you can use for upper school as well. An enjoyable book.
Kathy Hotz, Hercules Road State School

Tashi is back, but this time he stars in a picture book. He is the ingenious star and hero in over 30 stories in junior chapter book format; and has emerged from Kim Gamble’s mostly black and white illustrations to glorious colour embossed with glitter.
Tashi had never seen the dragon but his Grandmother had told him many stories of the dragon that lived over the mountains and was responsible for the annual rainfall. One year, however, the rains didn’t arrive. The creeks dried up, the rice crop failed and the earth turned to dust. A solution had to be found, or the village would face starvation. Tashi met a white tiger, and after reviving it with water, it told him that the mother dragon had fallen asleep, wouldn’t wake up and her son was left to run amok. Tashi rose to the challenge and hitched a ride on the tiger’s back to go sort the problem out. Tashi displayed bravery and creative thinking and soon the rains fell again.
Although I wasn’t a great fan of Tashi in earlier books I did enjoy this picture book and the classes I have read it to enjoyed it too.
This story is about overcoming challenges and suitable for aged five to nine children.
Claire Cheeseman, Laingholm Primary

What fun to have another full-colour picture book about quick-witted little Tashi!
Kim Gamble’s beautiful illustrations richly enhance the story of how Tashi helps a lonely dragon and brings the rain back to his village. Tashi is an excellent example of using brains rather than brawn to solve problems and he bounces back resiliently when faced with setbacks.
The Kindergarten class I shared this book with, enjoyed Tashi’s latest adventure immensely, and some of them were inspired to seek out his chapter-book adventures in the school library.
Kate Justelius-Wright, Wahroonga Public School, NSW

It was with great delight, but not surprise, that when I returned to working in a primary school library after a protracted absence I discovered that the favourite series amongst the students in Year 2 – the ones who are just starting their independent reading journey – was Tashi. Every day they asked for new stories or put existing ones on reserve. So they are going to be very excited to know that there is not one, not two, but five new additions to the adventures of this delightful little character who is so clever, resourceful and brave as he confronts fearsome opponents set on destroying his village and his peace.

Once Tashi Met a Dragon is a picture book beautifully illustrated in colour by Kim Gamble that is just delightful. In it, Tashi finally meets the dragon that he has heard stories about forever. Usually it lives on the mountain in a palace of gold and each year it sends the rains so that the villagers can thrive. But this year, the rains haven’t come and only one person is brave enough to venture forth to find out why…

Back in the days when I was co-ordinating Read Around Australia I ran a book rap based on all the Tashi novels published at the time. Small groups of students selected one story and had to write a synopsis and then pose a series of questions that would challenge the thinking of other students around Australia who had to answer them. What they discovered was that each story threw up a number of ethical questions that could be discussed and debated and so they became so much more than an introduction to fantasy and an easy read. Now a whole new audience can discover the magic meaning.

For a complete list of all the original Tashi books as well as more fun and games go to http://tashibooks.com/ or you can check out the new look, including a trailer at http://www.flyingbark.com.au/tashi/
Barbara Braxton, Teacher Librarian, NSW