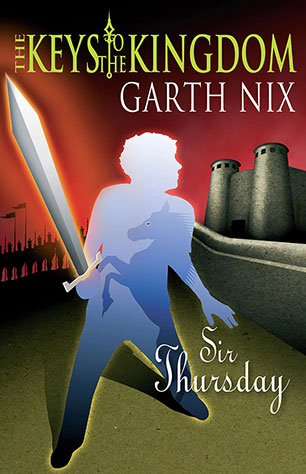 This is the eagerly awaited fourth book in Garth Nix's blockbuster fantasy-adventure series, The Keys to the Kingdom, following the best-selling Mister Monday, Grim Tuesday and Drowned Wednesday.

Following their adventures in the Border Sea, Arthur and Leaf head for home. But only Leaf gets through the Front Door. Arthur is blocked because someone or something has assumed his identity and is taking over his life.

Before Arthur can take action, he is drafted by Sir Thursday and forced to join the Glorious Army of the Architect. The Army has its headquarters in the Great Maze, a defensive area of the House. Half of the Maze has already been dissolved by Nothing, and hordes of Nithlings emerge regularly to attack the rest. If the Nithling invasion can overcome the Army and the Great Maze, the House will be lost and the whole universe destroyed.

While Leaf tries to banish Arthur's doppelganger on Earth, Arthur must survive his basic training, avoid getting posted to the Front and work out how he can free Part Four of the Will and gain the Fourth Key from Sir Thursday.
More books by this author More books in this series

Garth Nix has worked as a literary agent, marketing consultant, book editor, book publicist, book sales representative, bookseller, and as a part-time soldier in the Australian Army Reserve. Garth's books include the award-winning fantasy novels Sabriel, Lirael and Abhorsen; and the cult favourite YA SF novel Shade's Children. His fantasy novels for children include The Ragwitch, the six books of The Seventh Tower sequence, and The Keys to the Kingdom series. More than five million copies of his books have been sold around the world; his books have appeared on the bestseller lists of The New York Times, Publishers Weekly, The Guardian and The Australian; and his work has been translated into 37 languages. He lives in a Sydney beach suburb with his wife and two children.