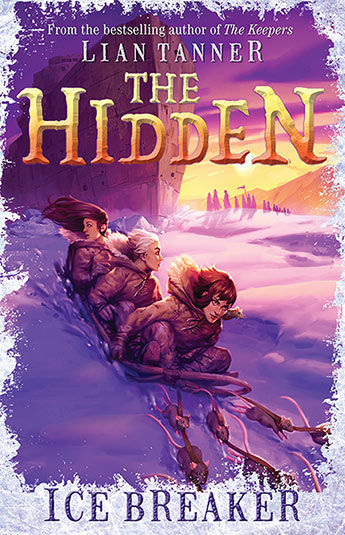 From the author of the wonderful Keepers series comes a vividly exciting fantasy-adventure, the first in The Hidden series.

Petrel leaned on the rail, watching the ice cave and stamping her feet for warmth. The berg came closer. That's when she saw him. Laid out on the ice like a dead fish, with a scattering of snow covering his face. A boy, where there should have been nothing but the memory of winter. A frozen boy.

Twelve-year-old Petrel is an outcast, the lowest of the low on an ancient icebreaker that has been following the same course for three hundred years. In that time, the ship's crew has forgotten its original purpose and broken into three warring tribes, the Cooks, the Officers and the Engineers. Everyone has a tribe except Petrel, whose parents committed such a terrible crime that they were thrown overboard, and their daughter ostracised.

But Petrel is a survivor. She lives in the dark corners of the ship, trusting no one, speaking to no one except two large grey rats, Mister Smoke and Missus Slink. That is, until a boy is discovered, frozen on an iceberg, and brought onto the ship. No one knows where he has come from, and when he recovers consciousness he claims to have forgotten even his name. The tribes don't trust strangers; they haven't seen one for three hundred years. But Petrel saves him and hides him away in the forgotten corners of the ship, hoping he will be her friend.

What she doesn't know is that for the last three hundred years, the ship has been guarding a secret. A secret that could change the world. A secret that the boy has been sent to destroy, along with the ship and everyone on it.
More books by this author More books in this series

Lian Tanner is a children's author and playwright. She has worked as a teacher in Australia and Papua New Guinea, a tourist bus driver, a freelance journalist, a juggler, a community arts worker, an editor and a professional actor. It took her a while to realise that all of these jobs were really just preparation for being a writer. Nowadays she lives by the beach in southern Tasmania, with a large fluffy tomcat called Harry-le-beau.