A Small Free Kiss in the Dark 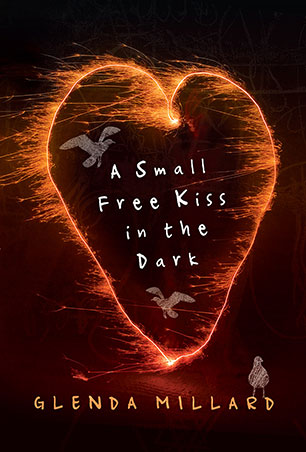 Two young boys, an old tramp, a beautiful lost dancer and her baby - rag-tag survivors of a sudden war - form a fragile family holding together in the remnants of a fun fair. This is a vivid, poetic story about life in the margins and the power of empathy and imagination to triumph over adversity.

Skip's an outsider, a quiet observer. He draws pictures to make sense of the world. He's never fitted in. So he takes to the streets. Life there may be hard, but it's better than the one he's left, especially when he teams up with old Billy. Then come the bombs which leave little Max in his care, and also Tia, the sad dancer, with her sweet baby, Sixpence. Scavenging for food, living on love and imagination.how long can Skip's fragile new family hold out as war grips the city?

'I love how outcasts, eccentrics and the uncommon qualities of being human emerge as heroes in Glenda Millard's novels. The authenticity of the characters comes from her willingness to expose her soul with every sentence.' Stephen Michael King

'This book shows how the kindness of strangers can often be purest, and how those who have nothing can be the richest people in the world.' Anna, age 15

'It made me think about what was important in life.' Keely, age 14
More books by this author

Glenda Millard began thinking about the main character for this book after noticing a newspaper headline about 'urban tribes', and she wondered what life would be like for a young homeless boy, living with people thrown together in circumstances beyond their control. While the backdrop for this story is war, her intention was to capture the indomitable nature of hope.