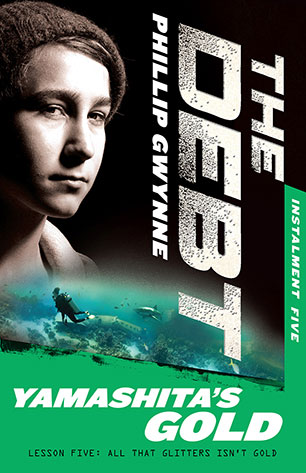 Book five of a high-octane thriller series. Dom has two more Herculean tasks to perform.or lose a pound of flesh. In this instalment he must locate the rumoured treasure of Yamashita's Gold.

The Debt was the worst thing to have come into my life. It had almost killed me about a dozen times in a dozen different ways. But here I was wanting, willing, it to contact me. To give me the next instalment.

After Rome, Dom has quit running. He's still training, though. Swimming lap after lap of the pool. And waiting.

Until Dom receives another threatening message. In Latin. He doesn't know who is after him now, but he hopes it's The Debt. He's pieced together the puzzle of the previous instalments, and he knows that the fifth one must be the search for Yamashita's Gold - the legendary treasure looted during the Second World War that might have ended up in the waters of Diablo Bay.

But for months he's heard nothing from The Debt. Just silence and more silence from this shadowy organisation. Could this message be it?