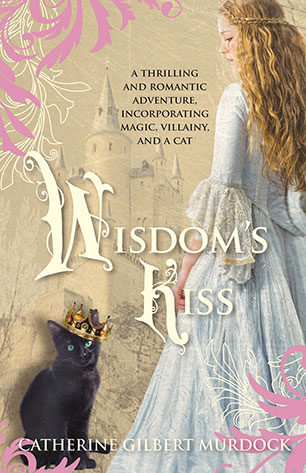 A thrilling and romantic fantasy adventure about a magical family, a kingdom under threat and one very unusual cat from one of the most original and exciting writers for children and young adults.

Princess Wisdom, known as Dizzy, longs for a life of adventure beyond the staid old kingdom of Montagne.

Tips, a soldier, longs to keep his true identity a secret.

Fortitude, an orphaned maid, longs only for Tips.

These three souls might possibly attain their dreams while preserving their empire from ruin if only they can bear one another's company long enough to come up with a plan.

Magic, cunning, and one very special cat join forces in this hilarious tale told in diaries, letters, encyclopedia entries, and even a play, all seamlessly stitched together by Catherine Gilbert Murdock, author of the highly acclaimed novel Princess Ben.

'Packed with double entendres, humorous dialogue and situations, and a black cat that will capture the reader's imagination, this is a joyful, timeless fantasy that teens will savor.' - Booklist

'This is a clean read, suitable for younger readers, but clever and sophisticated enough to entertain older readers.' - Mondays with Megan/rockyriverteenlibrarian.wordpress.com
More books by this author

Catherine Gilbert Murdock grew up on a small farm in Connecticut, where she wisely avoided all sports involving hand-eye coordination. She now lives in suburban Philadelphia with her husband, two brilliant unicycling children, several cats, and a one-acre yard that she is slowly transforming into a wee but flourishing ecosystem. She is the author of several books, including the popular Dairy Queen series starring lovable heroine D. J. Schwenk, the fantasy novel Princess Ben, and Front and Center.