Treasures of the Deep

More Tales of the Ship Kings 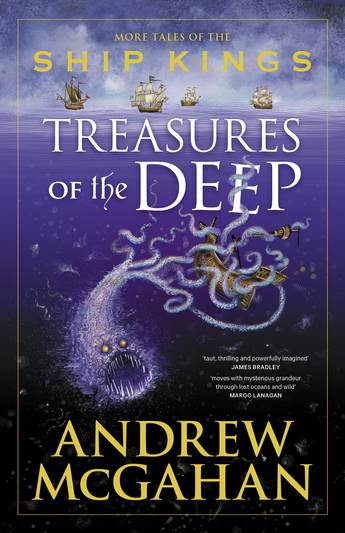 An atmospheric collection of stories set amid the oceans, seas and tall ships of the Ship Kings -- from the CBCA shortlisted author of The Coming of the Whirlpool and the Miles-Franklin-award-winning novel, The White Earth.

He turned: the scapegoat was pointing a fleshy arm directly down at the water, and following it Roland saw a mass of pale, stringy lines suddenly seething up from the deeps to surface all about the ship.
He froze in disbelief. It couldn't be--
But then the cry went up from the main deck.
'Ropes! White ropes!'
And so the horror began.

A ship and its crew held in thrall by an ancient sea creature, a young girl blinded by foresight, a scapegoat with a gift to foresee death - these haunting short stories set in the Four Isles, the setting of Andrew McGahan's highly acclaimed Ship Kings series, tell fascinating tales of tall ships, ancient grudges and the full significance of the meaning of indefinite survival in an ocean that holds as many mysteries as it does drops of water.

'A fitting end to the epic Ship Kings series, Treasures of the Deep moves with mysterious grandeur through lost oceans and wild. Its captains and crew, both real and ghostly, find equal parts horror and wonder in their path. These are some deep, dark, fantastical adventures. Do you dare to set sail?' --Margo Lanagan

'I didn't think I could love Andrew McGahan's Ship Kings universe more than I already do. But these taut, thrilling and powerfully imagined stories catapulted me back into the excitement and delight of the original quartet. Perfect for long-time fans or for those new to the series, they're a wonderful reminder of the ambition and intelligence that made McGahan such an essential writer.' --James Bradley
More books by this author More books in this series

Andrew McGahan was one of Australia's finest fiction writers. His first novel, Praise, won the 1992 Australian/Vogel Literary Award. The White Earth won the 2004 Miles Franklin Literary Award, the Commonwealth Writers' Prize, The Age Book of the Year and The Courier Mail Book of the Year Award. In 2009 Andrew was shortlisted for the Manning Clark House National Cultural Awards for his contribution to Australian Literature.

The Coming of the Whirlpool, book one in the Ship Kings series, was shortlisted for an Indie Award, an ABIA, an Aurealis Award, a Golden Inky and a 2012 CBC award. Book two, The Voyage of the Unquiet Ice was Highly Commended in the 2012 Fellowship of Australian Writers National Literary Awards -- Christina Stead Award, a 2013 CBC Notable Book and shortlisted for the Queensland Literary Awards. Andrew died in 2019.