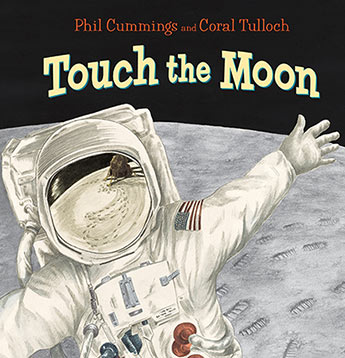 An atmospheric and lyrical story about the moon landing from a uniquely Australian perspective to mark the 50-year anniversary of the moon walk by Phil Cummings, the bestselling author of Anzac Biscuits, illustrated by the award-winning illustrator of One Small Island.

Neil stepped out of the module.
He moved carefully down the small ladder.
He reached the last step and stopped.
Slowly, he placed his foot on the moon.
'That's one small step for man, one giant leap for Mankind.'

It's a cold day in July and on a small television screen in Australia, a man is going to walk on the moon! At the same time, outside the window, another kind of miracle is unfolding.

A lyrical personal account of the first moon walk, commemorating the 50th anniversary of this momentous global event.
More books by this author

Phil Cummings is the author of over sixty books for children, in a career that has spanned thirty years. His work has been published around the world and has received multiple awards. Most recently, Ride, Ricardo, Ride! was a 2016 CBCA Honour Book, and Boy was shortlisted for the 2018 CBCA Book of the Year Award and won the 2017 Children's Peace Literature Award. Phil's favourite pastimes are listening to music, trying to play guitar, watching the cricket, cheering for the Adelaide Crows in the AFL, working in the garden and walking Daisy, his little (but very bossy) Jack Russell terrier. He lives in South Australia.

Coral Tulloch has illustrated over sixty fiction and non-fiction books for children, in Australia and internationally. Her book Antarctica, The Heart of the World, which she wrote and illustrated, won the 2004 Environment Award for Children's Literature. One Small Island, Coral's highly-acclaimed book about Macquarie Island which she created with Alison Lester, won the 2012 CBCA Book of the Year Award, as well as the Environment Award for Children's Literature in the same year. Coral lives in Tasmania.