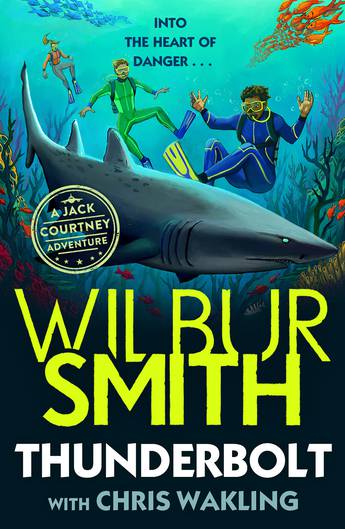 Jack and his friends Amelia and Xander are in Zanzibar diving for lost treasure to support Jack's mother's coral protection project. Going further than usual on their last day, their dive boat is lured into a trap and captured by Somali pirates. Determined that his mother shouldn't pay a ransom for their release, Jack won't give up his attempts to escape.

Transferred to a militia training camp for boy soldiers, the trio's only hope is the resourceful Somali boy Mo who befriends them. Can they outwit the ruthless General Sir and his merciless troops in the second gripping adventure from the authors of Cloudburst?

Praise for Cloudburst:
'Unputdownable conservation themed action and adventure.' - LoveReading4kids
'An exciting and realistic story, full of bandits, poachers and amazing wildlife...It keeps you turning the pages to the end.' - i Paper
More books by this author More books in this series

Wilbur Smith is a worldwide phenomenon. His readership has built up over fifty-five years of writing. Born in Central Africa in 1933, Wilbur became a full-time writer in 1964 following the success of When the Lion Feeds, and has since published over forty global bestsellers, including the Courtney Series, the Ballantyne Series, the Egyptian Series, the Hector Cross Series and many successful standalone novels, all meticulously researched on his numerous expeditions worldwide.

The establishment of the Wilbur & Niso Smith Foundation in 2015 cemented Wilbur's passion for empowering writers, promoting literacy and advancing adventure writing as a genre. The foundation's flagship programme is the Wilbur Smith Adventure Writing Prize. For all the latest information on Wilbur visit www.wilbursmithbooks.com or facebook.com/WilburSmith