Home>Browse>Books>Children's>This is NOT a Unicorn!

This is NOT a Unicorn! 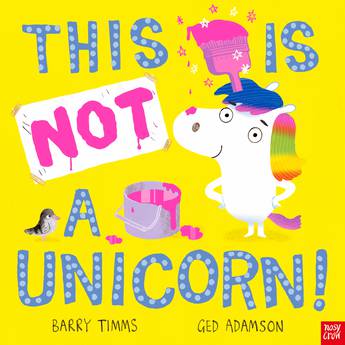 A very funny, fast-paced, original picture book with a touching twist and neon ink throughout.

Get ready for a magical and hilarious adventure about the most fantastic unicorn EVER!This book is NOT about a unicorn! Well . . . OK, maybe it is! But THIS unicorn has a horn that can turn into the most incredible things - a magic wand, a helicopter, even a space rocket! Join the hilarious adventure and prepare to be amazed by your brilliant new friend. With wonderful wordplay and a funny and sweet friendship at its heart, this is NOT a unicorn book to be missed! This fabulously funny story has stacks of appeal for both girls and boys - watch out for rockets, rainbows, helicopters, massive fish, ice cream sundaes and magical adventures.
More books by this author

Barry Timms (Author)
Barry grew up in Cornwall. He spent his early years mending pop-up books brought home from the library by his mum. Vast swathes of Sellotape were involved.

In the late 90s, Barry moved to London to study Fine Art at Central Saint Martins. By a twist of fate, he later secured an editorial job at Walker Books. He's been editing children's books ever since.

More recently, Barry has been writing picture books of his own. He loves the knotty puzzle of structuring a story over so few pages. Even better is the rush of excitement when a solution lands in the shower, or while walking the streets of South London. That's a feeling worth its weight in gold.

Ged Adamson (Illustrator)
Ged was born in Liverpool and as a child he was obsessed with drawing, listening to music and making up tunes.

Composing music eventually became his job but having a career writing and illustrating picture books had always been a big ambition.

In 2016, his story about a short sighted dog, Douglas You Need Glasses! received rave reviews and became his breakthrough picture book.

He has written and illustrated many books including Shark Dog! and A Fox Found A Box.
He lives in London with his partner Helen and their son Rex.

Download the This is NOT a Unicorn! activity sheets