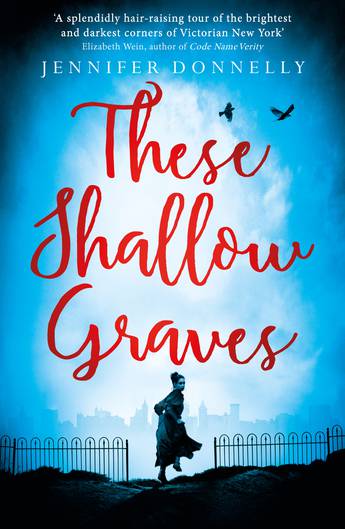 A wealthy family. A deadly secret. A young woman with more to lose than she know. A historical romance with a feisty female heroine and a chilling murder mystery, this is Jennifer Donnelly at her very best.

Josephine Montfort is from one of New York's oldest, most respected, and wealthiest families. Like most well-off girls of the Gilded Age, her future looks set - after a finishing school education, she will be favourably married off to a handsome gentleman, after which she'll want for nothing. But Jo has other dreams and desires that make her long for a very different kind of future. She wants a more meaningful and exciting life: she wants to be an investigative journalist like her heroine Nellie Bly.

But when Jo's father is found dead in his study after an alleged accident, her life becomes far more exciting than even Jo would wish. Unable to accept that her father could have been so careless, she begins to investigate his death with the help of a young reporter, Eddie Gallagher. It quickly becomes clear he was murdered, and in their race against time to discover the culprit and his motive, Jo and Eddie find themselves not only battling dark characters on the violent and gritty streets of New York, but also their growing feelings for each other.
More books by this author

Jennifer Donnelly is the author of seven novels and a picture book for children. She grew up in New York State, in Lewis and Westchester counties, and attended the University of Rochester where she majored in English Literature and European History.

Jennifer's first novel, THE TEA ROSE, an epic historical novel set in London and New York in the late 19th century, was called 'exquisite' by Booklist, 'so much fun' by the Washington Post, a 'guilty pleasure' by People and was named a Top Pick by the Romantic Times.

Her second novel, A NORTHERN LIGHT, set in the Adirondacks of 1906, against the backdrop of an infamous murder, won the Carnegie Medal, the Los Angeles Times Book Prize, the Borders Original Voices Award, and was named a Printz Honor book. Described as 'rich and true' by The New York Times, the book was named to the Best Book lists of The Times (London), The Irish Times, The Financial Times, Publishers Weekly, Booklist and the School Library Journal.

REVOLUTION was named a Best Book by Amazon, Kirkus, School Library Journal, and the Chicago Public Library, and was nominated for a Carnegie Medal. The audio edition was awarded an Odyssey Honor for Excellence.

In 2014, Jennifer teamed up with Disney to launch the bestselling WATERFIRE saga, an epic series about six mermaids on a quest to rid the world of an ancient evil. The first book in the series, DEEP BLUE, was released in May, 2014; the second book, ROGUE WAVE, launched in January 2015.

Jennifer lives in New York's Hudson Valley with her husband, daughter, and two rescue dogs.
Follow Jennifer at www.jenniferdonnelly.com or on Twitter: @JenWritesBooks