The War of the Four Isles: Ship Kings 3 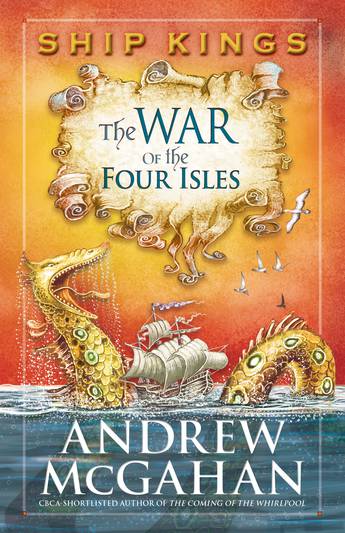 Dow Amber faces terrifying monsters and devastating betrayal as he is drawn into a battle that threatens to destroy everything he has ever loved. The third gripping instalment in this epic adventure by the award-winning author, Andrew McGahan.

'The ancient mapmaker had inscribed a warning within the great empty shadow on his chart, words that echoed down to Dow from half a thousand years before.

Here be whales in great number.

And here be monsters of the deep that riseth to feast upon them.'

Nearly three years have passed since Dow Amber escaped the ruin of the Twelfth Kingdom. In that time, war has raged across the Four Isles, but Dow himself has been hidden away by his Twin Islands hosts, relegated to a backwater of the war in the company of the beguiling Cassandra.

But when word reaches Dow that Ignella of the Cave has been imprisoned on the infamous Ship Kings dungeon-isle of Banishment, he can be patient no longer. He sets forth on an epic voyage that will take him halfway around the world - defying storm and monster, betrayal and despair - to the heart of the greatest battle of the age, and to the discovery at last of his true purpose upon the high seas.

The War of the Four Isles is the third volume in Andrew McGahan's momentous Ship Kings series.
More books by this author More books in this series

Andrew McGahan is one of Australia's finest fiction writers. His first novel, Praise, won the 1992 Australian/Vogel Literary Award. The White Earth won the 2004 Miles Franklin Literary Award, the Commonwealth Writers' Prize, The Age Book of the Year and The Courier Mail Book of the Year Award. In 2009 Andrew was shortlisted for the Manning Clark House National Cultural Awards for his contribution to Australian Literature.

The Coming of the Whirlpool, book one in the Ship Kings series, was shortlisted for an Indie Award, an ABIA, an Aurealis Award, a Golden Inky and a 2012 CBC award. Book two, The Voyage of the Unquiet Ice was Highly Commended in the 2012 Fellowship of Australian Writers National Literary Awards - Christina Stead Award, a 2013 CBC Notable Book and shortlisted for the Queensland Literary Awards.