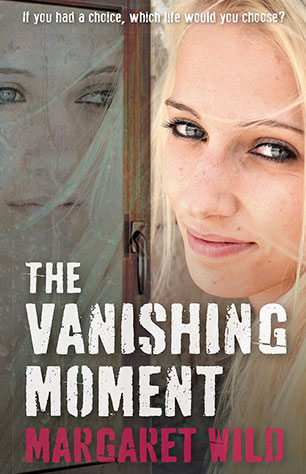 If you could live a different version of your life, would you take the chance? From the award-winning author Margaret Wild, this spellbinding story places two young women at the turning point in their lives, and each must choose to accept the life she has, or to leap into one she might yet live.

A moment. That's all it takes. A bewildering moment when the world spins upside-down, and then life can never be the same again.

Arrow was just a girl when she saw something no child should have to see. And Marika is living a sister's worst nightmare.

When Arrow and Marika come together in a small seaside town, they meet a mysterious 'magician' who says he knows how to escape the now and step into a new future.

A brilliant and bittersweet story of loss and courage, with a surprising twist.

Margaret Wild is one of Australia's most highly respected and best-loved authors for children and teenagers. Her novels for young adults are Jinx and One Night. Jinx was shortlisted for the CBCA awards and for the Queensland, NSW and Victorian Premier's Awards. Margaret is the recipient of many awards, including the Nan Chauncy Award.

I found this a rather disturbing book, similar in some ways to my first reading of Lois’ Lowry’s The Giver. There’s the same mixture of chilling reality and unreality, though neither book could be described as a fantasy.At the beginning of the novel, where the reader is introduced sequentially to each major character, the language is sparse, clipped and economical — like Margaret Wild’s text of the picture book Fox. We get to know the essentials at the outset, though their interconnectedness is something that takes the rest of the novel to unfold.

While the characters are all given enough description and we meet their immediate families as well, there remains a shallowness to each one that isn’t really satisfactorily resolved, despite the fact that much of the plot is psychological rather than action based. The issues addressed by the characters are presented matter of factly and without heavy handedness, but I was left with a feeling of disengagement bordering on disappointment. And of course the main premise of the novel, that an unpleasant outcome can be exchanged for another life is, to say the least, untenable. The problem is that there are significant creative elements within the story (a bit like Ruth Park’s My Sister Sif) that could have been dealt with in a way that gave them a much more credible development and the reader a more satisfying experience. I’m afraid I can’t give this book an enthusiastic recommendation, unless it were to set the scene for a creative writing exercise to write a better ending!
Julie Davies

Marika, Arrow and Bob have all had to deal with tragedy in their lives. Marika helped her mother a day a week by looking after her half-brother Jasper. On one of their outings to the Aquarium, Jasper disappears without trace. The family is naturally devastated and traumatised. Marika can’t stop crying and her mother can’t start. Marika is exiled to the family’s holiday house. This is a solution which appears not to benefit anyone.

While there Marika meets Arrow who has returned to her beloved childhood home, the small town where she found the murdered bodies of her three best childhood friends. From that time Arrow has been a sleepwalker and unable to function successfully though she did complete her HSC.  It’s her somnambulism which brings the two girls together.

Bob’s tragedy is much less definitively described and leaves the reader unsettled because of the few details given. It has to do with the understated abuse by his step-father Dean. We are left to imagine what he has been through. Marika’s and Arrow’s lives interconnect in this small town and both are influenced by magician Bob, the man with the incredible memory, who believes that we can swap lives with another version of ourselves from a parallel universe. The talks about the role of the disembodied voice which asks “I can Interchange...shall I?” And is the answer yes, or no? Which life is to be followed?
Wild has created a beautifully crafted memorable story, which forces the reader to confront the very different personal sufferings which happened to all three characters. Their stories are individually told, even when they are all in the same town, with the occasional overlap when all three characters are together. The endings are both unexpected and slightly predictable.
Because of the subject matter this novel would be best suited to middle to upper school students who can empathise with the events which are prequels to the novel. There are lots of discussion points, including:
•The concept of parallel universes
•Emotional trauma and its treatment
•Possible other endings and whether the one Wild used is the best one
•Possible choices each of the main characters had at various times through their lives
•The book’s minor characters
•Discussion of the literary and artistic references throughout the story
•Role of Jorge Luis Borges’ The Garden of Forking Paths in and to the story
Maureen Man


It's every parent’s nightmare, the loss of a child. In this little book, Margaret Wild tears our hearts apart multiple times, with connections between lost children falling out of chapter after chapter. Children can be 'lost' in many ways, we know that.

Margaret Wild has taken her theme for The Vanishing Moment from a poem, The Twins, by Gwen Harwood, which is used as a kind of dedication:
'If there are multiple worlds
then let there be one with an ending
quite other than theirs'
The Vanishing Moment begins with a memory: a vivid one. A child, a boy, possibly named Bob; a car; & a stepfather. We are thrust immediately into a vivid moment, one that introduces a key character, in first person narrative, and begins near the beginning of the boy's life. So we can assume that 'Bob' will survive; but we can't be sure. The chapter is brief, a flash, fewer than 200 words: & the child is thrust out of the car & abandoned.

The second chapter places us in another person's reality: a dark, self obsessed reality where 'somnambulism' is only one sign of a darkness in a teenage girl's mind. We don't know why Arrow[Alyssa] is so self isolating, but we suspect clinical depression, with hints of a triggering event. We also meet an absolutely normal old chap, Mr Watts, who as the 'kindly old gentleman' is a reassuring presence after such a rocky start. The setting is contemporary, although past events intrude sharply at the end of the second chapter, with 'the murders' at 'Shelley Beach' being spoken of. This is the story of a young woman who does not know how to move on from childhood events which are too shattering, too emotional, too impossible to accept. Entrance of a third character, Marika, a young sculptor, in Chapter 3; & it starts to seem that this little novel is stretching the friendship between writer/reader just a tad too far. We're struggling to find connection, continuity. There is also a young sibling, the 3 year old Jasper.

Margaret Wild weaves her magic, & when young Bob in chapter 4 breaks my heart as the lonely 6 year old boy ignored by his mother & stepfather, I'm sufficiently hooked to stay with this little (only 184 pages of spare, vivid prose) post modern Teen 'mystery' novel. The twist comes via a location, a house which seems to connect to other realities, a seaside town filled with memory & terrifying evil: & via a shift in the space time continuum. Wild allows choices & pathways seemingly made & taken to lead to one of Gwen Harwood's  'multiple worlds.. one with an ending quite other than theirs...' In the process we have to accept that the ledger of life does not always balance fairly.
Helen Wilde, SA