Home>Browse>Books>Children's>The Secrets of Flamant Castle: The complete adventures of Sword Girl and friends

The Secrets of Flamant Castle: The complete adventures of Sword Girl and friends 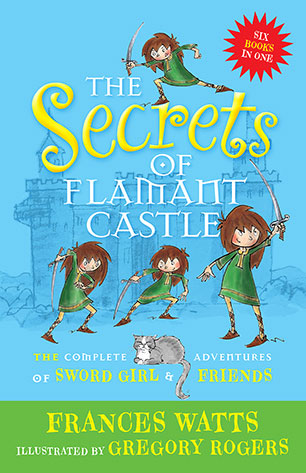 Fun and fantasy combine in this collection of six amusing stories about Tommy, the daring and curious girl who also happens to be Keeper of the Blades, and her cast of unusual friends including Lil the talking cat and Tommy's best friend Jasper, the ghost of a young squire.

Tommy, a kitchen girl at Flamant Castle, dreams of becoming a knight - and when she is made the Keeper of the Blades, caring for all the swords in the castle armoury, it seems like her dream might come true.

But trouble is never far away from Flamant Castle and the Keeper of the Blades is often in the thick of it. Luckily Tommy is both daring and curious, and has a cast of friends ready to help, including Lil the talking cat, the friendly Crocodiddle who lives in the castle moat and her best friend Jasper, the ghost of a young squire who inhabits one of the old swords.

The Secret of the Swords

'There is energy, excitement, wit and a gentle wisdom in this chapter book series .' Magpies
More books by this author More books in this series

Frances Watts was born in Lausanne, a small city in the French-speaking part of Switzerland, and moved to Sydney when she was three. She spent nearly ten years working with some of Australia's most talented children's authors and illustrators before writing a book of her own, Kisses for Daddy, illustrated by David Legge. Their second collaboration, Parsley Rabbit's Book about Books, won the Children's Book Council of Australia's Eve Pownall Award. Her picture book Goodnight, Mice! (illustrated by Judy Watson) was awarded the 2012 Prime Minister's Award.

Gregory Rogers was the first Australian to be awarded the prestigious Kate Greenaway Medal. His first wordless picture book The Boy, the Bear, the Baron, the Bard was selected as one of the Ten Best Illustrated Picture Books of 2004 by the New York Times and short-listed for the CBCA Awards, Younger Readers, 2005 and the APA Best Designed Children's Picture Book, 2004. Gregory sadly passed away in 2013.