The Keys to the Kingdom Complete Collection (slipcase) 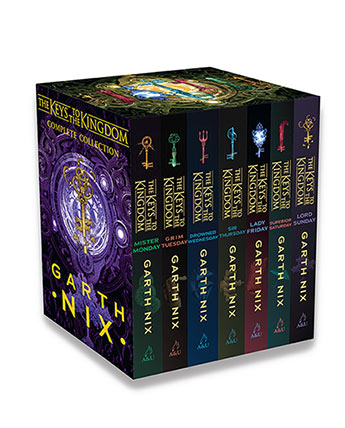 Arthur is not supposed to be a hero. But when he is saved from an untimely death by a strange key shaped like the hand of a clock, everything changes. Arthur is safe, but his world is in terrible danger, and Arthur will have to be a hero whether he likes it or not. Desperate, he ventures inside a mysterious house that only he can see, where he finds himself battling powerful enemies and making unexpected friends. Arthur must unravel the secrets of the Keys, piece together the Will of the Architect, discover his true fate and save the world...if he can.
More books by this author More books in this series

Garth's books include the young adult fantasy Old Kingdom series, comprising Sabriel, Lirael, Abhorsen, Clariel and Goldenhand; science fiction novels Shade's Children and A Confusion of Princes; and a Regency romance with magic, Newt's Emerald. His fantasy novels for children include The Ragwitch, the six books of the Seventh Tower sequence, the Keys to the Kingdom series and others. He has co-written several books with Sean Williams, including the Troubletwisters series, Spirit Animals Book Three: Blood Ties, Have Sword, Will Travel, and the sequel Let Sleeping Dragons Lie. A contributor to many anthologies and magazines, Garth's selected short fiction has been collected in Across the Wall and To Hold the Bridge.

More than five million copies of Garth's books have been sold around the world. They have appeared on the bestseller lists of The New York Times, Publishers Weekly and USA Today, and his work has been translated into 42 languages. His fantasy-adventure Frogkisser! is being developed as a film by Twentieth Century Fox/Blue Sky Animation.