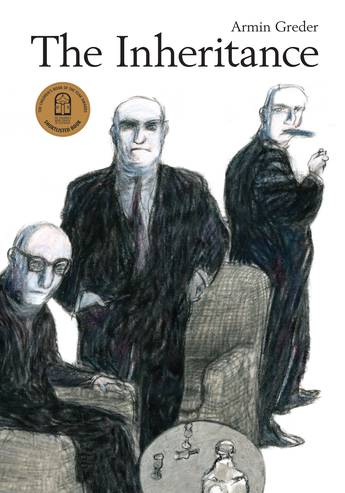 A provocative call-to-arms to economic leaders to change course and better protect our planet and its people, presented in words and pictures by the multi-award-winning creator of The Island and The Mediterranean.

'All this will soon be yours, respect what I have built and make it prosper.'

These are the last words of the old industrialist before dying. While the three brothers discuss how to fulfil their father's wishes, the sister lists for them the disastrous consequences that would follow: disease; marine pollution; deforestation; the destruction of the landscape; pollution of skies and rivers…

The Inheritance tells of the greed of those who hold economic power, and reminds us that silence and inaction amount to complicity. With minimal text, this powerful story is told primarily through Armin Greder's distinctive illustrations that challenge the reader to question the status quo and fight for the future.

Powerful storytelling from the internationally acclaimed, award-winning creator of The Island and The Mediterranean and Diamonds.
More books by this author

Armin Greder was born in Switzerland. In 1971 he migrated to Australia where he worked as a graphic designer and later taught design and illustration at a tertiary art institution. Books he has illustrated include 2016 CBCA Picture Book of the Year, Flight, with Nadia Wheatley, and The Great Bear, An Ordinary Day and I Am Thomas, all written by Libby Gleeson. Books he has authored and illustrated include The Mediterranean, The Island, The City, Australia to Z and Diamonds. His work, in which charcoal is prominent, reflects his European background. He is the recipient of a number of international recognitions such as the Bologna Ragazzi Award and has been nominated for the Hans Christian Andersen Prize. He now lives in Lima, Peru, together with his companion Victoria.