The Grunts in Trouble 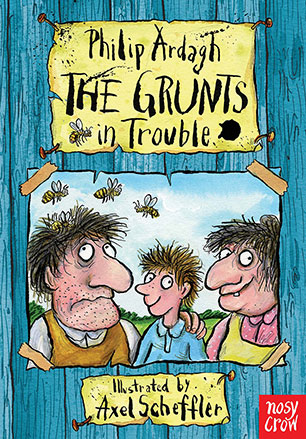 Like 'The Twits' for a new generation, the Grunts are neither clean nor clever, but their adventures are most definitely terrifically fun reading. Created by two stars of the children's book world: Philip Ardagh's hilarious text is brought to life with illustrations throughout by Axel Scheffler. Read the book and play the free app game.

Meet Mr and Mrs Grunt and their son, Sunny, who isn't really their son because they stole him off a washing line when he was a baby. Follow their adventures in their homemade (badly-made) caravan, drawn by Clip and Clop (whom the Grunts took to be one donkey until they realised that they could see them both at once) then add a household of disgruntled servants from nearby Bigg House (owned by the wildly unpopular Lord Bigg); a swarm of angry bees; and some serious misunderstandings and mischief and you begin to get an inkling of the trouble they find themselves in. That kind of trouble that begins with a capital 'T'.
More books by this author More books in this series

Roald Dahl Funny Prize winning author Philip Ardagh is best known for his Eddie Dickens adventures, translated into over thirty languages, and for his Grubtown Tales, but he is author of over 100 books. He collaborated with Sir Paul McCartney on the ex-Beatle's only children's book. He is a regular irregular reviewer of children's books for The Guardian, and is currently developing a series for television. Philip Ardagh is two metres tall with a ridiculously big, bushy beard and size sixteen feet, making him an instantly recognisable figure at literary festivals around the world.

Axel was born in Hamburg, Germany. At school he was good at art, but didn't think of a career in illustration until he won a cuddly purple cow in a drawing competition. Axel has illustrated a number of other highly successful books, including Muddle Farm, and his books have been translated into 42 languages. Axel lives in London with his partner and young daughter.

Download a Grunts pin the tail on the donkey activity