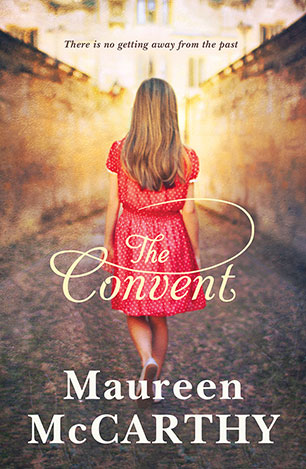 There is no getting away from the past . A breathtaking novel from Maureen McCarthy, spanning generations, that will be devoured by young women, their sisters, friends, mothers and grandmothers.

'I woke up with a feeling about today,' Stella says dreamily. 'Something truly amazing is going to happen.' 'To us or to the world?' I say. 'To you.' 'To me?' I laugh. 'Nothing ever happens to me, Stella.' 'But today it will.' 'Will it be good?' She looks thoughtful and then frowns. 'I . I don't know.'

Peach is nineteen and pretty happy with the way things are. She has her university work, two wildly different best friends, her sister, Stella, to look after and a broken heart to mend. But when she takes a summer job at a cafe in the old convent, her idea of who she is takes a sharp turn into the past.

Where once there were nuns, young girls and women who had fallen on hard times, Peach discovers secrets from three generations of her family. As their stories are revealed, Peach is jolted out of her comfort zone. But does she really want to know who she is?

Warm and real, intense and provocative, Maureen McCarthy's The Convent shows in vivid detail how fate and the choices we make ripple and reverberate through time.

A novel to fall in love with.
More books by this author

Maureen McCarthy is the ninth of ten children and grew up on a farm near Yea in Victoria. After working for a while as an art teacher, Maureen became a full-time writer. Her novels have been shortlisted for numerous awards and include the In Between series, which was adapted from scripts Maureen co-wrote with Shane Brennan for SBS TV; Ganglands; Cross my Heart; Chain of Hearts; Flash Jack; When you Wake and Find me Gone, Rose by any other name, Somebody's Crying and Careful what you wish for. Her much-loved bestseller, Queen Kat, Carmel and St Jude Get a Life was made into a highly successful 4-part mini-series for ABC TV and has been reissued by Allen and Unwin.