The Adventures of Tupaia 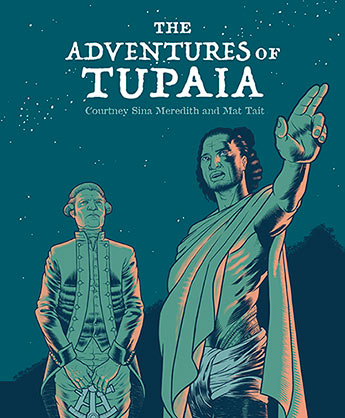 The incredible story of Tupaia, Tahitian priest navigator, who sailed on board the Endeavour with Captain Cook on his first voyage to Aotearoa.

'An essential book. A magnificent book in debt to mahi and aroha.' Paula Green Poetry Box

Follow Tupaia as he grows up in Ra'iatea, becoming a high-ranking 'arioi and master navigator. Join him as he meets up with Cook in Tahiti and sails as part of the crew on the Endeavour across the Pacific to Aotearoa. Witness the encounters between tangata whenua and the crew as the ship sails around the coast, and discover the important role Tupaia plays as translator and cultural interpreter.

Written in dramatic prose and verse by Courtney Sina Meredith and stunningly illustrated in graphic style by Mat Tait, this is an essential book for all New Zealanders.
More books by this author

Courtney Sina Meredith is an Auckland poet, playwright, fiction writer and musician. Her award-winning works include her play Rushing Dolls, poetry Brown Girls in Bright Red Lipstick and short stories Tail of the Taniwha. Courtney has held various international residencies including the International Writing Program at the University of Iowa where she is an Honorary Fellow in Writing. She is the Director of Tautai, New Zealand's leading contemporary Pacific arts trust.

Mat Tait is a South Island based comics artist and writer. He gained a BFA in painting from Ilam School of Arts and then lived in America and Britain before settling in Motueka, where he does freelance illustration and works on his art. His comics work has been published widely both locally and internationally, most recently The Heading Dog Who Split In Half with writer Dr Michael Brown. He has also illustrated numerous children's and educational material for Learning Media, Pearson and other publishers.