Home>Browse>Books>Children's>Tashi and the Giant Squid

Tashi and the Giant Squid 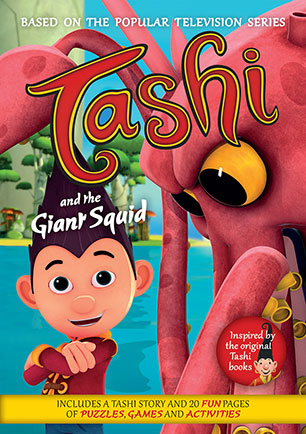 Jack and Tashi have to solve the mystery of the missing trophy and Tiki Pu's spittoon in this all-new novelisation of an original episode from the popular animated series 'Tashi', screening on ABC3, based on Anna and Barbara Fienberg's classic character.

It's the Annual Fishing Contest but the valuable golden trophy is missing. Everyone suspects the Baron, but when Tiki Pu's spittoon is stolen too, Jack and Tashi have more than one mystery to solve.

Giants, ghosts, witches, bandits, demons, dragons. Tashi, Jack and Lotus Blossom are ready for anything!
More books by this author

When Anna Fienberg was little, her mother, Barbara, read lots of stories to her. At bedtime they would travel to secret places in the world, through books. The Tashi stories began when Barbara was telling Anna how she used to tell whoppers when she was a child. Creative fibs. Tall stories. And kids would crowd around her, dying to hear the latest tale. Together they talked about a character like Barbara - someone who told fantastic stories - and over many cups of tea they cooked up Tashi.

As well as having his own series, Tashi appears in two splendid picture books, illustrated by Kim Gamble: There Once Was a Boy Called Tashi and Once Tashi Met a Dragon.

Flying Bark has been creating iconic animated children's entertainment since 1968. With the international release of two animated feature films and several television series about to launch, the Flying Bark star is still well and truly rising. Flying Bark is located in Sydney, Australia, nestled in between the hub of Newtown and Sydney University.

Make your own Tashi stand

When one of the best loved characters from Australian children’s books is turned into a highly acclaimed and hugely popular TV series, you can expect the fun to just keep on coming! And it does as a new series of Tashi books, based on the animated show (Flying Bark Productions), hits the shelves. Jack and Tashi are determined to win the Annual Fishing Competition but the Warlord has other (and more devious) ways of making sure that he ends up with the golden trophy. Unfortunately, he doesn’t hold onto it for long and when it goes missing, Jack and Tashi need to solve the mystery. Along the way they manage to acquire a baby kraken and it can only be a matter of time before that infant’s mother comes looking for it.

Miss Small thoroughly enjoyed this story – just as much as she does the originals and the TV show and is looking forward to more. As a delightful bonus, after the story there are several pages of engaging activities such as word searches, crosswords, quizzes, mazes and more created by the talented Meredith Costain. There was great excitement today when the mail arrived with two more in the series. I know what will be on the reading agenda tonight!
With loads of colour, a great story and the activities these are sure to be winners with your readers from around 7 and up!
Sue Warren, QLD

It was with great delight, but not surprise, that when I returned to working in a primary school library after a protracted absence I discovered that the favourite series amongst the students in Year 2 – the ones who are just starting their independent reading journey – was Tashi. Every day they asked for new stories or put existing ones on reserve. So they are going to be very excited to know that there is not one, not two, but five new additions to the adventures of this delightful little character who is so clever, resourceful and brave as he confronts fearsome opponents set on destroying his village and his peace.

Once Tashi Met a Dragon is a picture book beautifully illustrated in colour by Kim Gamble that is just delightful. In it, Tashi finally meets the dragon that he has heard stories about forever. Usually it lives on the mountain in a palace of gold and each year it sends the rains so that the villagers can thrive. But this year, the rains haven’t come and only one person is brave enough to venture forth to find out why…

Back in the days when I was co-ordinating Read Around Australia I ran a book rap based on all the Tashi novels published at the time. Small groups of students selected one story and had to write a synopsis and then pose a series of questions that would challenge the thinking of other students around Australia who had to answer them. What they discovered was that each story threw up a number of ethical questions that could be discussed and debated and so they became so much more than an introduction to fantasy and an easy read. Now a whole new audience can discover the magic meaning.

For a complete list of all the original Tashi books as well as more fun and games go to http://tashibooks.com/ or you can check out the new look, including a trailer at http://www.flyingbark.com.au/tashi/
Barbara Braxton, Teacher Librarian, NSW