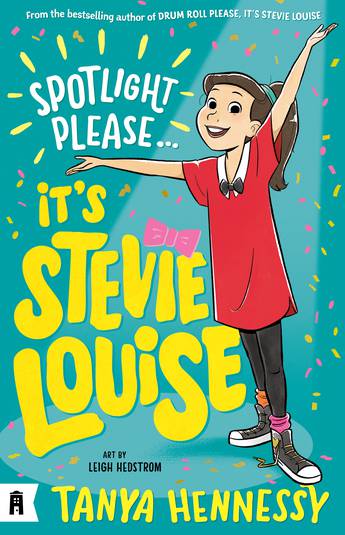 A hilarious new adventure from bestselling children's author Tanya Hennessy. Wherever Stevie goes, high drama is sure to follow...

Stevie Louise is an entrepreneur (that's like a business person), an entertainer (obviously), and an extrovert on the inside (wait, is this a thing?).

Stevie and the Brooke Street crew are hard-up for cash. Going viral doesn't last forever, you know, and killer costumes are expensive. To keep their showbiz dream alive, the kids are competing in a local talent quest. But the competition is stiff (I mean, have you ever heard four goats sing acapella?), and Alex has a unicorn horn glued to his forehead for at least the next three weeks.

It's tough working under these conditions, but Stevie is up for any challenge to save Lunchbox Productions...

If Amy Schumer and Rebel Wilson had a love child, you'd get Tanya Hennessy - comedian, radio announcer and social media sensation. Originally from Newcastle, Tanya started in radio in 2012. Since then she has become an international social media sensation; written her first book, bestseller Am I Doing This Right?; become an ambassador for Priceline Pharmacy; sold out 27 venues for her first comedy show Low Expectations; and appeared on I'm a Celebrity, Get Me Out of Here! In 2017 Tanya's rising star was recognized when she won the Junkee Award for Breakthrough Artist, was nominated for Cosmo Woman of the Year, selected to perform at Australia's first VIDCON and won best radio documentary at the Australian Commercial Radio Awards. Talented and hilarious, Tanya is a true multi-media star.

Leigh Hedstrom is a freelance illustrator who lives on the Sunshine Coast with her family. She grew up in South Africa, drawing every day and dreaming that one day she might become a Disney animator. In the early 2000s, hand-drawn animation studios all around the world closed their doors, so she had to find the next best thing, which turned out to be the actual best thing - illustration. What Leigh loves about illustrating is being able to work across a bunch of different industries: publishing (books), education (workbooks, teaching aids and videos), advertising, and more recently, product development (toys). She also gets to work with amazingly talented people, like Tanya Hennessy. The Stevie Louise books have become a favourite project, because it's not often that Leigh gets to draw the same characters many times … Stevie, Alex, Trixie, Addison, Macey, Luke and Hannah have crept into her heart and become like real people to her. Leigh enjoys the perks of a work-from-home job, such as the privacy to sing showtunes whilst working, having a cat within arms reach and eating lunch from a plate.