Song of the Slums 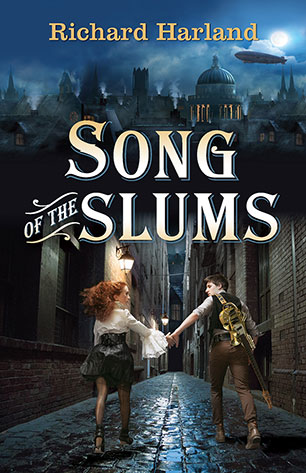 An absorbing, page-turning story about fame, changing fortunes and music, set in an alternative Victorian world, from the brilliant creator of Worldshaker.


What if they'd invented rock 'n roll way back in the 19th century? What if it could take over the world and change the course of history?

In the slums of Brummingham, the outcast gangs are making a new kind of music, with pounding rhythms and wild guitars. Astor Vance has been trained in refined classical music. But when her life plummets from riches to rags, the only way she can survive is to play the music the slum gangs want.

Charismatic Verrol, once her servant, is now her partner in crime.and he could be so much more if only he'd come clean about his mysterious past.

'I loved the music, the syncopated rhythm, the dark, smoky atmosphere, the call to arms, the love story.this is gaslight fantasy at its best.' Kate Forsyth

Richard Harland was born In England and migrated to Australia at the age of 22. He spent many years as a singer/songwriter and many more years as a lecturer at Wollongong University before finally overcoming writer's block and finishing his first novel in 1993.

He resigned to become a full-time writer in 1997, and has been busy ever since producing fantasy, steampunk, SF and horror fiction for all ages. He has won six Aurealis Awards in Australia and the prestigious Tam Tam Je Bouquine Award in France.

As a person who loves music and music history, I was nervous about this book, but I was pleasantly surprised to find myself in a world that was so inventive it pulled me in, and so real that I could picture every instrument and every sound.The story follows Astor, who arrives in Brummingham expecting to marry wealthy plutocrat, Lorrain Swale, but soon finds herself instead as governess for his brothers’ horrible children. Despite her valiant attempts to teach them, the children force Astor to seek an escape, with the help of her servant Verrol. Their survival on the streets of Brumminham relies on their ability to find favour with one of the city’s street gangs, by displaying their talents playing the music of the slums. I felt for Astor as she struggled with her newfound poverty, and admired her tenacity and refusal to give in. I also enjoyed the presence of the mysterious and constantly surprising Verrol. The love story of these two young people is at times infuriating, but in the end highly moving. Perhaps my favourite characters though were the supporting cast. The other band members, Granny Rouse the gang leader and the despicable Swale children, all brought unique spark to the story.

The strongest message of this book is about the power music has to change the world, and bring people together. However, whirling around Astor are the stories of the ex-soldiers who feel out of place in peacetime, the plutocrats chasing political ambition, and the street kids fighting for survival. The coming together of these stories is what allows for such a satisfying conclusion. If the protest music of history inspires you, then you will love this book. It is Bob Dylan in the 60s and 70s, and the rise of the blues in America. You’ll want to head straight to your nearest festival and settle in for a dance.
Nic Courto, Tasmania

Duped by her mother and step-father from her life of luxury into a life as a governess, Astor Vance is left to fend for herself in a world far different from what she is used too. Rescued by Verrol, her once servant, he takes her into a deep dark world of slum gangs where they use their musical talents to find safety and security in a gang. From there begins a rollercoaster ride into the creation of a slum music band and their rise to fame. Astor is completely naive with music being the only thing that she truly knows anything about. Without the help of Verrol, Astor would not have lasted a night in the world by herself. She is not a very endearing character as she constantly grasps for the life that she left behind. Verrol on the other hand is mysterious and has power about him which comes from his past, a past that he is trying to forget. The blurb on the back of the book is deceptive as almost a third of the book is political and this is the point that becomes boring and uninteresting. Harland is brilliant in creating a vivid world of slums, gang music, gas-filled airships, factories and smog but the intensity is lost on the political narrative that he attempts to weave into the story. Along the way there’s a love story woven into it which is a must in most YA novels. An interesting read which lovers of music and fantasy will enjoy.
Nicole Chettle, Smithton High School, Tasmania

What a rip roaring rollicking read! Steam punk fiction meets lamplighter romance in this wonderful novel by Richard Harland. The setting is C19th post war industrial England. The main characters are Astor, the privileged daughter of a woman who has remarried an ex-military man after the death of her musician husband. The step father does not approve of his musical step daughter and arranges for her to take a job as governess to the Swale children, the richest family in England living in the smog infested putrid city of Brumingham. All of this is unknown to Astor who has the belief that she was going to wed one of the sons. She is left in the polluted city with a man servant called Verrol. Her experiences at the Swale household leave much to be desired and she makes a daring escape with Verrol into the Slumtown with the view to joining a gang. From there our two brave heroes escape attacks and achieve initiation into a gang. Astor’s musical talent and Verrol’s charisma come to the attention of gang leader Granny who has a vision and sees a world class band coming out of the slums and playing on a world stage with their unique instruments and inspiring songs. Through fair means and foul they find themselves at the Royal George Hall in London and caught up in a plotted coup against the incumbent peaceful government. When they realise that they have been manipulated by the war mongering plutocrats, Verrol and Astor take a stand and use their musical ability to quell the violence and help restore order. Amongst this fast paced plot line we have Astor’s initial infatuation for the youngest Swale son, Lurian and eventually her realisation that her true love lay with Verrol.

Within this Dickensian setting and scenario this book deals with themes such as integrity, self-belief, love and the ability of music to conquer all boundaries. Whilst reading this book I was reminded of a quote by Plato, ‘When the music changes, governments fall.’ In this case the music changes but a coup was avoided. This being said this is a book about the power of music to lead revolutions and the 1960’s peace movement is evidence of this. There is much in this book that could be used with students. A inter textual analysis with a Dickens novel would make for interesting observations. The novel also lends itself to students looking at the role that music has played throughout history and how musical movements can be linked to changes in society. A thoroughly enjoyable read and highly recommended.
Sharon Marchingo, Crusoe 7-10 Secondary College

As the title suggests, Music is at the heart of Song of the slums. This YA novel makes Music a powerful and central force, both in the personal development of its central character, the young classical violinist Astor Vance, and the movement towards civilization and a more just society of the setting.  Set in a possible near future, the novel is almost oblivious to current trends towards the life lived in the e world. Instead, the world has almost moved to an earlier, mediaeval style social context, where violence, brutality, and class oppression need to be overcome. The novel suggests that the music of young, innovative people is the force which can unite disaffected peoples and bring them together to overthrow the ruling class. The setting is a dark, polluted world, possibly England, certainly the locations ‘London Town’ and ‘Brummingham’ would suggest so, as would the class structure which is reminiscent of an ‘Upstairs Downstairs’ world with rigid class structures and few refinements. There are also elements which seem to echo life in a Middle East country at war, or bikie wars gone global. This is a dark, unpleasant world which you would not want to experience. An unhappy, privileged, ignorant girl, Astor is longing for ‘something else’ in her life, preferably love, at least marriage to someone kind who will give her the happy, loving, safe home she lost when her father died and her mother married her stepfather. Instead she finds herself in the middle of a civil war which is anarchistic and where exploitation of the underclass is a way of life for the privileged, with willing ‘militias’ of young men ready to be used as war fodder in order to make sense of their world and to validate their manhood.

Harland uses the technique of the omniscient author as narrator, allowing us to follow the narrative through all the actions of characters and to hear their internal life. There is an element of didacticism which could easily allow classroom teaching using the parallels of the power of the novel’s ‘gang music’ with the youth music driven social reforms of the relatively recent past. I also like the metaphor of ‘finding your voice’, as Verrol’s previously ‘too raspy’ voice is acknowledged as the voice of gang music. The Love Story element to this YA novel helps to hold the reader, and the character of Verrol is sufficiently attractive to keep the reader engaged. The story of the power of Youth music to galvanise crowds is very believable, and you certainly want the side of right to prevail. There are some engaging descriptions of settings. I will remember the railway carriages where the militiamen had their headquarters.
Helen Wilde, SA

Set in an alternate “Victoria-era”, Song of the Slums is a mystery, riches to rags, romance and music festival all rolled into one intriguing story.
The story begins with Astor Vance, a girl from the right side of town, who trained as classical musician just like her father, was taken to meet her future husband, the handsome and rich plutocrat Lorrain Swale by her mother and step-father. But it wasn’t until they had left she had realised what was to become of her life. She wasn’t getting married, she wasn’t going to be considered as part of the almighty Swale dynasty or live in the lap of luxury.  She was going to be the Swale’s governess to three spoilt and bratty children.  With only her servant, Verrol, from her old life, Astor plots to escape the predicament she finds herself in.The mysterious Verrol has plans as well and when he and Astor overhear the Swales brothers plans for the future of the country, they make the perilous escape into the night.  They flee into the slums of Brummingham and talk their way into joining a street band, creating and playing a new kind of sound that is set to take the country, if not the world, by storm. But the Swale Brothers are in pursuit. If you are into steam-punk then this is the book for you.  It normally would not have been a book that I would have chosen to read but I liked it.  It was a bit different and exciting and the story kept on moving.
Alison Hay, Teacher-Librarian, Yarra Hills Secondary College