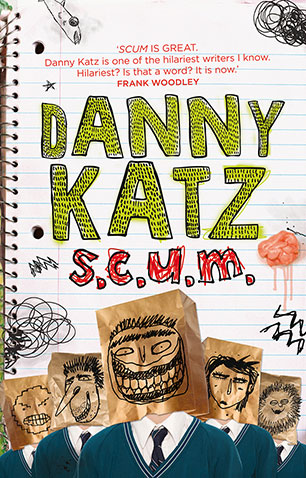 Adrian Mole goes to Summer Heights High in this story of hormones, high school and social hierarchy from one of Australia's funniest writers. 'S.C.U.M. is great. Danny Katz is one of the hilariest writers I know. Hilariest? Is that a word? It is now.' - Frank Woodley

It's just an ordinary day for Tom Zurbo-Goldblatt.

The possibility of romance with his dream girl. Powerful friendships to forge. Wrongs to right. The ultimate test of survival against the Badass Ninjas of Stupidity of Death.

And his first-ever sighting of a girlpube.

Who says you don't learn anything at school?

The Students Combined Underground Movement (S.C.U.M.) is a society for outcasts, weirdos and massive losers. At their headquarters on the bench beside the bin behind the canteen, they plot their revolutionary ideas for a better schoolyard. Divided they may be weak, but as S.C.U.M., they're still weak; but at least they have somewhere to sit.
More books by this author

Danny Katz is a columnist for The Age and The Sydney Morning Herald. He writes the Modern Guru column in the Good Weekend magazine. He is also the author of the books Spit the Dummy, Dork Geek Jew and the Little Lunch series for kids.