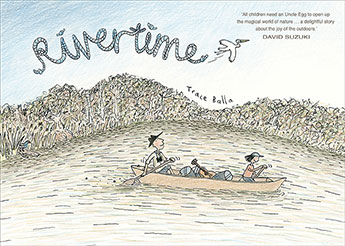 A gentle and beautiful book about slowing down and growing up, set on Australia's Glenelg River and featuring a ten-year-old boy and his uncle.

A tender and beautifully illustrated tale of a boy and his bird-watching uncle, on a paddling trip on Australia's Glenelg River. A story about slowing down, growing up, and connecting with the land and its creatures.

'All children need an Uncle Egg to open up the magical world of nature. We all need to get outside, away from television, computers and mobile phones, and what better way than a canoeing- camping trip? This is a delightful story about the joy of the outdoors.' David Suzuki

'Rivertime is a quirky, charming immersion into the life of a waterway and into the life-lessons a river can teach.' Maya Ward (author of The Comfort of Water)
More books by this author More books in this series

Trace Balla is often found sketching in nature, riding her bike, dancing, and growing vegies in her garden in central Victoria. She loves to illustrate and write songs and stories, and inspire others in their creativity and care for the planet. Her background is in illustration, community arts, art therapy, animation, and writing songs and stories, and she enjoys visiting schools and festivals to talk about her work.