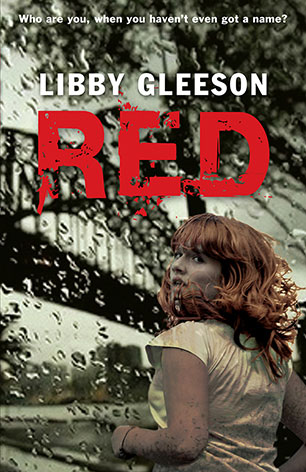 A gripping mystery unfolds in the aftermath of a devastating cyclone that leaves a young girl unable to remember her name or where she comes from . Vivid, compelling writing from popular, multi-award winning author Libby Gleeson.

Mud. In her mouth, her nose and her eyes. Mud in her hair and caked on her neck and her arms. Mud filling her shoes and seeping through the thin cotton weave of her trousers. She lay sprawled on her side, a garbled, barely distinct sound coming from her: jaymartinjaymartin. Her world was mud and pain.

'What's your name?' A boy was sitting on a kitchen table floating in a muddy pool. At his feet was a child's doll, the head lolling to one side.

He stepped forward and slapped her hard across the face. 'Shut up that stupid talk.'

Red can't remember the cyclone. She can't remember anything - her name, where she lived, who her family might be. Her identity has been ripped away. Then she makes a discovery, and finds she has an important mission to accomplish. But in this chaotic, bewildering world, can she do it on her own? Who can she trust?

Libby Gleeson AM is a popular, highly acclaimed writer who has published over 30 books for children and teenagers, including Eleanor, Elizabeth, I Am Susannah, and the Hannah series. She has been shortlisted for the CBCA Awards thirteen times, and won it three times. The Great Bear (with Armin Greder) was the first Australian book to win the prestigious Bologna Ragazzi Award, in 2000. Her novel Mahtab's Story was published by Allen & Unwin in 2008, and her picture book I Am Thomas (with Armin Greder) in 2011. See also Libby's website: www.libbygleeson.com.au

Libby has been a teacher and lecturer and is a regular contributor to national conferences. She chaired the Australian Society of Authors 1999-2001, and in 2007 was awarded membership to the Order of Australia. She is the winner of the 2011 Dromkeen Medal, awarded for contributions to childrens literature.

This is a multi layered novel. The young protagonist suffers from amnesia after a cyclone hits the eastern suburbs of Sydney. She remembers nothing of her past. She is rescued by Peri, a young boy not much older than her who names her Red. Peri appears to be street wise and he becomes the catalyst for Red to begin moving forward. It is not until half way through the novel that Red discovers her real name. And that she has a father.
But this discovery is just a new beginning, as it adds new layers and complexity to Red’s already dire circumstances. Her past proves to be more mysterious than she had bargained for. She begins a journey, with the instructions to trust nobody. It is this journey that sees our protagonist mature and slowly learn that in life the first person we need to learn to trust is ourselves and our ability to arise above all kind of difficulties.
Libby Gleeson maintains the suspense until the very end. Not only does Red get to deliver the contents of the locket to the appropriate person, she also gets her memory back and is reunited with her injured father and new found friends.
There are plenty of topics for classroom discussion in this book. The importance of family, love, moral values and friendship, corruption and the justice system, natural disasters and how society deals with them, charitable organisations and the role they play in our complex world.
The language is crisp, and accessible. The short sentence structures would suit not only reluctant readers but ESL learners as well. Recommended for Junior High school readers.
Angela Vassiliou, Adelaide High School, SA


Resilience is a buzz word in educational circles at present: how to equip children to overcome adversity; how to build resilience in our kids; how to help each other with the challenges of living. Bibliotherapy can play a role in this process, showing how characters respond and grow through the difficult situations they encounter.
Red, a new book by Libby Gleeson, is a well-crafted novel in the tradition of Hills End (Ivan Southall, 1962) where children face catastrophe and overcome the odds without adult help. Libby Gleeson has fused this well-known formula with an action/crime plot, where Red, the young protagonist must not only deal with homelessness and amnesia following a cyclone hitting Sydney, but also the confusion of piecing together memories of her father and the quest he gave her at their parting.
Digital clues, the necessity of a journey, helpers along the way—these are all classic story elements, but appear fresh and relevant in this modern tale dealing with current events only too vivid in the minds of contemporary Australians.
Initially hesitant, due to the somber tone of the monochromatic cover and the bleak opening scene, about showing the book to my ten-year-old, as I read deeper into the narrative I was reassured. The bravery of the Red, her gradually returning memory, and helpful strangers all increase the positive mood and the reader is provided with a highly satisfactory conclusion.
For a younger readership than John Marsden’s Tomorrow series, this book encapsulates many of the same story elements, but in a less frightening scenario. The pace and delivery of the story will keep advanced Yr 6 and early secondary school readers hooked to the end.
If you are looking for a wise and positive yet entertaining, contemporary book to help children deal with natural disasters, this is it. (And let’s lobby to get the classic Hills End back in print.)
Julie Thorndyke, RIDBC Renwick Centre

Fast paced and punchy, Red is an engaging story that will be popular with both boys and girls. Three young teenagers, two girls and a boy, are thrown together by a catastrophic cyclone that has wiped out many seaside Sydney suburbs and devastated the nearby coastal areas. And Red, known variously as Rhiannon, Ruby or Rose, who’s the main protagonist, has lost all memory of life before the time when she wakes up, spitting out mud and sand, in the midst of the destruction.
Flashbacks and the backwards-unfolding adventure upon which she, Peri and Jazz embark see the trio travelling by train to Melbourne where the memory stick that Red’s been wearing since she came back to consciousness is handed over to the Royal Commission looking into crime and corruption.
Reunion with her shadowy father, who turns out to be an investigative hero, makes for a satisfying denouement and lots of loose ends are successfully tied off by the end of the novel.
A well-bound paperback, with comfortable fonts and frequent sectioning within chapters, Red is an accessible novel for Middle School students. It would be of particular interest for units on resilience, survival and co-operative enterprise. Another example of why Allen and Unwin has achieved the Publisher of the Year Award for 2012, again. Recommended.
Julie Davies, Sutherland Shire Christian School

When you pick up this book the cover gives you a sense of foreboding and the text doesn’t change this perception. Immediately the reader is in the action and the trepidation experienced looking at the cover is realised.
The reader is introduced to Red immediately, a teenage girl who doesn’t know who she is or where she is. She meets Peri who isn’t what he seems and together the adventure begins. Red wants to find out who she is and what happened to her family. This journey is not easy as she learns more which leads to worrying thoughts about her father. Red’s character is tested when she must decide between following, to the letter, what her father has told her and her current friends.
The short chapters and uncomplicated text will make this accessible not only to years 7 and 8 but also to many year 6 students. As the tension mounts the reader can’t put it down so this will keep all readers interested until the end. This would be a successful read aloud book for year 5 students.
A key teaching idea for this book would be around trust and resilience. Red has to decide who to trust including herself but her resilience in the face of very difficult and unusual times would provide a starting point for discussion with any class. It would also provide an introduction into the world of politics and Royal Commissions and their role in our society. Discussion with students around how things change, as in the ending, would help readers to think about their own lives when things change unexpectedly.
Roxanne Steenbergen, Windermere Primary School, TAS

When “Red” awakes, her mouth full of mud and an unknown and seemingly meaningless name on her lips, she is greeted by a boy named Peri who quickly proceeds to slap her for gabbling. She remembers nothing of the cyclone which has devastated Sydney and nor does she remember anything about her family or personal history. It quickly becomes obvious that Peri doesn’t mean to hurt her but is willing to help her survive and discover the truth about her origins. Thus begins their adventure. As they move about trying to find food, shelter and information, they meet up with characters that may or may not prove to be trustworthy. As Red uncovers more clues as to her family, she loses faith in those who initially seem to be there to help her in her quest. Will she find out who she can trust and be re-united with her family again?
This is an easy and relatively engrossing read. Gleeson creates some interesting characters and a plot which could inspire much discussion in the classroom, if this were to be used as an Upper Primary read aloud or title for literature circles. Issues such as amnesia, natural disasters and their effects and the responsibility of humans in ensuring that the likelihood of such events occurring is minimised could be used as points of study. The issue of self and taking on personal responsibility is also raised, along with the importance of having a history and sense of belonging.
Red could well be used as a comparative text alongside Deborah Abela’s Grimsdon. Both titles explore the lack of responsibility taken by adults to avert possible disasters and use the young protagonists as vehicles to bring about change through their sense of duty and commitment as they work to bring things to rights. I found this to be an enjoyable read.
Jo Schenkel, Pilgrim School

An interesting story of resilience, determination and survival, set initially in a Sydney that has been devastated by a freak cyclone’s winds and rain. It is a gripping story of intrigue and disaster with a problem that encompasses two states and the need to avoid sharing the details with anyone except each other.
The main character, Red, has suffered the brunt of the disaster and cannot remember her name or background. She meets Peri who lives an alternate lifestyle as one of society’s outcasts. He helps her survive and re-establish her identity, and link with former friends. As Red rebuilds her identity, she realises there is something she needs to do and the race is on. Heading for Melbourne to fulfil her possibly dead father’s request to take something to a judge who is charge of a Royal Commission, and ever aware of possible danger and the risk of being caught, Red faces fear while meeting people who prove both supportive and dangerous. In a few short days so much happens and is accomplished.
Libby Gleeson has created a believable world that draws in the reader. Characters are interesting, situations are realistic and the storyline races along without losing impetus or interest. I found it enjoyable and I am far from the target teen audience. One of my year 6 students has begun reading it and due to her recommendation there is a line up of students wishing to borrow it after her. This story is a great read for anyone who likes a good story with an interesting plot and characters with whom you can empathise.
Colleen Thistleton, ACT