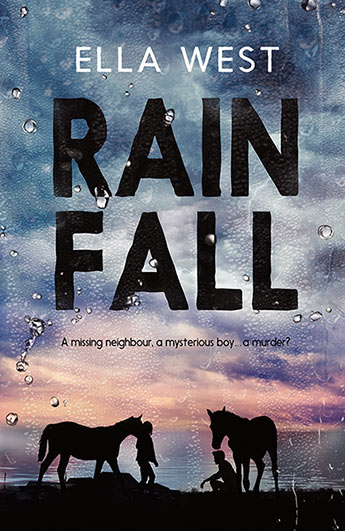 A tense, engaging read that will have you racing through the pages.

And then it starts to rain.

Fifteen-year-old Annie needs to get to her basketball match, but the police have cordoned off her road. Is her neighbour, who she grew up with, still alive? What has he done to have the police after him?

A murder investigation brings new people to Annie's wild West Coast town, including a dark-haired boy riding the most amazing horse she has ever seen. But Annie is wary of strangers, especially as her world is beginning to crumble around her. In setting out to discover the truth Annie uncovers secrets that could rip the small community apart.
More books by this author

New Zealander Ella West and her husband live on a small sheep farm near Dunedin after spending many years on the West Coast. Ella started writing plays for children for the New Zealand School Journal but soon crossed over to fiction and her first teen novel Thieves was published in 2006, the first in a trilogy. Since then she has also written several adult plays including The Middlemarch Singles Ball. She enjoys writing for children and teenagers because anything can happen in a story for children. There's always magic. Ella was awarded the Louis Johnson New Writers' Bursary in 2006, and her novel Night Vision won the 2015 LIANZA Young Adult award and the Young Adult Children's Choice award in the New Zealand Book Awards.