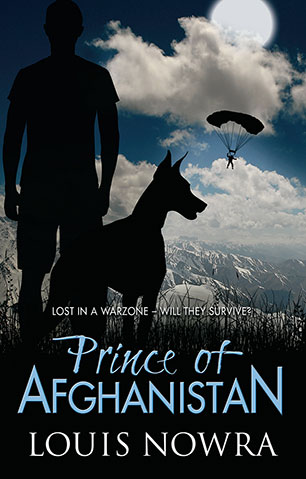 After a rescue mission goes wrong, a young soldier and his dog find themselves alone in hostile territory. Will they survive the perilous journey back to base?

Black parachutes fall from the sky: young soldiers - and a dog - on a rescue mission in a remote part of Afghanistan.

But the mission ends in chaos, and Mark and Prince embark on a perilous journey through enemy territory. Will they make it back to base? All they have is each other. All they can do is survive, today, tomorrow and the next day.

A dramatic, powerful story of war and the bond between a young soldier and a dog, from the acclaimed author of Into That Forest.

Louis Nowra was born in Melbourne. He is the author of such plays as Inner Voices, Inside the Island, Summer of the Aliens, Cosi, Radiance and The Boyce Trilogy. Some of his non-fiction works are Chihuahuas, Women and Me, Bad Dreaming and the recent Kings Cross: A biography. His novels include The Misery of Beauty, Palu, Red Nights, Abaza and Ice. As well as his two memoirs The Twelfth of Never and Shooting the Moon, he has written radio plays, telemovies, libretti and screenplays. His previous young adult novel was Into That Forest.

Louis Nowra lives in Kings Cross with his wife Mandy Sayer, a writer; Coco, their chihuahua who has appeared in magazines, newspapers and on television; and Basil, their miniature pinscher who avoids the limelight.

Prince of Afghanistan is a thoroughly engaging text which grabs a reader from the very beginning in holds them through the entire book. The text explores war in Afghanistan focusing on a soldier and man’s best friend, a beautiful dog named Prince who loses his trainer but still tries to do his job and protect the protagonist from the Taliban.
Whilst reading this text readers become aware of the difficulties that soldiers face when the rest of a combat team have been killed. At times, extremely suspenseful, the reader is drawn into combat zones with the soldiers due to the vivid visual imagery which describes the setting and plot. This novel is written beautifully with language which explores the dark colours of Afghanistan and serious nature of war.
It would work well with a year eight or nine class who are studying the concepts of friendship, mateship, trust or conflict. The text is accessible for a range of students with varying academic abilities and will interest students through its engaging themes. This is certainly a text which will appeal to the boys as it is quick paced and filled with action, suspense and a little bit of gore.
This is a truly beautiful and seemingly realistic text which inspires people to believe that animals are just as reliable, as friends, as human beings. Prince will make all readers want their own dog.
Tanya Davies, English and ESL Teacher, International Coordinator, Ku-Ring-Gai Creative Arts High School, NSW

Written for young readers, this touching novel explores survival behind enemy lines and the bond between man and beast. It is set in Afghanistan where a rescue mission isn’t quite as seamless as the army would hope. When stranded by an errant grenade, Mark finds his mate dead and his mate’s Doberman Pinscher deafened by the blast. Living with the promise he had made his mate, Casey, Mark sets out to return to base through Afghanistan’s mountainous, Taliban-occupied terrain.
From the first person perspective, Nowra narrates Mark’s experience and anguish. The tone of the story fluctuates as does the tension but it is a quick, exciting read. Some descriptions border repulsive but the horror of war has no punches pulled. Initially the frequent use of first person pronouns annoyed me, distracting my reading but as the story progressed it became more natural and engaging. The subtext of the importance of family relationships climaxed tenderly in the final chapter, odd as that may sound in talking of a war story.
In a class room, I would use this as a conference set in conjunction with a range of other novels set in war zones like the classics I am David and The Silver Sword, along with any of the recently published UNICEF sponsored ‘Through My Eyes’ series and even Michael Morpugo’s War Horse. The unit would look at the craft of writing: the importance and place of descriptive writing, authentic voice – of the narrator and of characters in dialogue. My overarching question would be ‘What makes a good (war) story?’
Michael Cruickshank, Hellyer College, TAS

After a tumultuous home life back in Emerald Creek, New South Wales, one of the only ways that Mark can escape the drudgery of his life is to join the Australian Defence force. This brings consternation to his father who had already experienced the conflict in Vietnam and returned to Australia with a raft of illnesses. The calming love of a mother in a family situation was also not present for Mark as she had died earlier in his life. This sets up the opportunity for the reader to reflect on their own family life and the ties that eventually see so valuable.
Whilst the adventure that a war setting can provide to some people, the mountainous rugged regions of Afghanistan temper this to quite a degree. Mark was to parachute into a Taliban held zone top rescue some captive Allied infantry. A dog, Prince and Casey, his handler, were part of this rescue force.
As with all war zones and conflict, soldiers need to be prepared for the negative eventualities that often arise. This was the case in this operation. After a successful first part of the operation, Casey was taken out by Taliban regulars along with one of the two rescue helicopters. This presented dilemma upon dilemma for Mark and the dog Prince. The encounter with Afghan villagers, unknown geography and the oppressive heat of the region, keep the reader wanting to discover the resolution of this dire situation.
Underpinning the whole novel are a variety of themes that twist through the saga. The ‘term man’s best friend’ is evoked by the author with some incredible scene descriptions. Even the humanity that Mark displays in the face of what he conceives as evil, touches the reader. A resolution to Mark and Prince’s situation was always going to appear a positive one. The use of unmanned drones on battlefields was so vital in this instance. The discovery of an allied soldier wandering the shale like slopes of Afghan terrain with a faithful yet determined dog partner, enabled a pick up to be arranged and hence provide a rescue.
The poor recollection that Mark has of the last part of his journey reinforces the power of rescue and then return to one’s home land. The bond between Mark and Prince is to be strengthened even more in the time to come as they are both repatriated to Emerald Creek and a lonesome, distraught but now welcoming father. To come back to Australia and revisit his father and to restart a life back home after war horror also evokes an emotional response for the reader.
Mr. Trevor Dangerfield, Elisabeth Murdoch College, VIC.