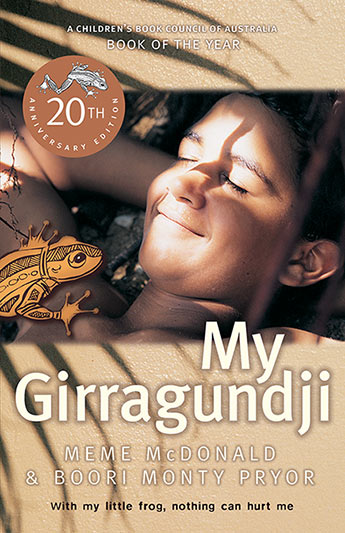 The 20th anniversary edition of the award-winning, much loved story that tells how a little tree frog helps a boy find the courage to face his fears.


'I wake with a start. The doorknob turns. It's him. The Hairyman.'

There's a bad spirit in our house. He's as ugly as ugly gets and he stinks. You touch this kind of Hairyman and you lose your voice, or choke to death.

It's hard to sleep when a hairy wrinkly old hand might grab you in the night. And in the day you've got to watch yourself. It can be rough. Words come yelling at you that hurt.

Alive with humour, My Girragundji is the vivid story of a boy growing up between two worlds. With the little green tree frog as a friend, the bullies at school don't seem so big anymore. And Girragundji gives him the courage to face his fears.
More books by this author

Meme McDonald was a graduate of Victoria College of the Arts Drama School. She began her career as a theatre and festival director, specialising in the creation of large-scale outdoor performance events. Since then she worked as a writer, photographer and on various film projects. Meme McDonald's previous books - five of which have been written in collaboration with Boori Monty Pryor - have won six major literary awards.

Boori Monty Pryor was born in North Queensland. His father is from the Birri-gubba of the Bowen region and his mother from Yarrabah, a descendant of the Kunggandji and Kukuimudji. Boori is a multi-talented performer who has worked in film, television, modelling, sport, music and theatre-in-education. Boori has written several award-winning children's books with Meme McDonald and was Australia's inaugural Children's Laureate (with Alison Lester) in 2012 and 2013.