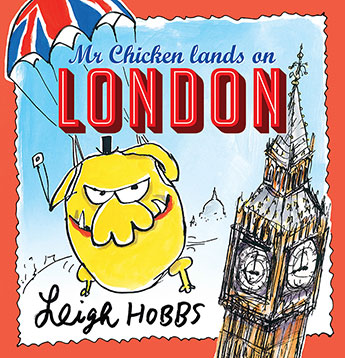 Explore London with Mr Chicken in this paperback edition of a much-loved favourite.

Mr Chicken can't wait another minute, so he finishes his breakfast, collects his camera and flies to London. He wants to see everything.

Join Mr Chicken and let him show you his favourite city in all the world.
More books by this author More books in this series

“Mr Chicken couldn’t wait another minute, so he finished his breakfast, collected his camera and flew to London. London was his favourite city in all the world.”

And so begins another adventure of this quirky character who, five years ago, showed us the sights and delights of Paris and whose size and shape made him instantly recognisable. Using his Union Jack parachute to land gently in the River Thames (luckily his camera was waterproof) he checks into the Savoy Hotel and, after a good night’s sleep, a full English breakfast and a quick review of facts and figures about London, he visits his special friend, Her Majesty the Queen for morning tea and makes an impromptu balcony appearance. But he can’t stay long – there is so much to do before lunch and tourists keep stopping him to take their photo. After lunch, sumptuous as usual, his sightseeing continues with all the iconic spots on his itinerary until he is so tired he needs a quick nap before dinner. Then the night’s entertainment begins! And come midnight, after a hectic day, he finally feels he has London to himself as he walks, in the light of the fall moon, down the Mall to the House of Parliament.

Once again, Leigh Hobbs has packed as much into this story as Mr Chicken packed into his day in London and it’s such a fast pace that you get breathless just thinking about it. Even reading his schedule on the endpaper is enough to overwhelm you and its forecast by the map of the city on the front endpaper. But of course, this isn’t just a travel guide to London - Mr Chicken is the star of the show and Leigh Hobbs’ humour is evident in every picture. This book is so much richer than its text and pictures. Like Mr Chicken Goes to Paris it’s an opportunity for young students to understand that there are places beyond those that are familiar to them and compare them to their home town.

Using the book as the impetus, we used Google Earth to “fly” us to London and the functionality of that app to view the places that Mr Chicken visited, so we were really inside the story and able to develop an understanding that each place has its unique iconic features, environments and activities that attract locals and visitors alike. Then we asked the question, “If Mr Chicken came to our town, what would be the unique places he could visit and things he could do?” sparking an investigation into the natural, built and heritage features of our local environment which offered so many cross-curricular avenues to explore that continued to engage the students for some time. Like Mr Chicken, they identified the must-sees and must-dos, photographed and drew them, mapped them and created an itinerary for visitors to our region. Amazing learning for Year 1 students!

Even without its use in this way, Mr Chicken Lands on London will be a winner with students as its predecessor continues to be, and I do hope it’s not another five years before he goes on another journey.
Barbara Braxton, Teacher Librarian, NSW