More than a Kick

Footy, the Photo and Me 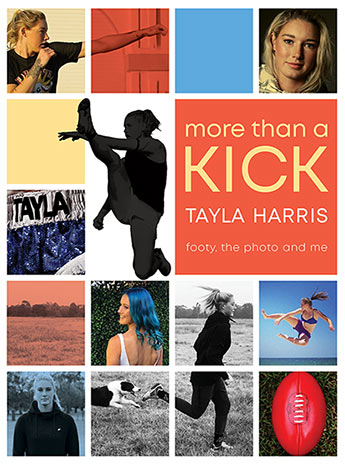 In March 2019, Tayla Harris went from rising AFLW star to the face of a movement. A photo of her mighty airborne kick was viciously attacked by trolls and Tayla chose to call out the online harassment. Six months later she was unveiling a bronze statue of her kick in the heart of Melbourne, inspiring girls and young women everywhere to stand strong and pursue the things they love.

AFLW player Tayla Harris was at work on the footy field when she kicked a goal. A photo of the kick - taken by Michael Willson - showcased her incredible athletic ability and was posted online. What happened next was an extraordinary turning point in Tayla's life. The photo quickly became iconic as Tayla stood strong against the online trolls. This is the inspiring story of Tayla's stellar sporting career so far, and her hard-earned advice to young people navigating the ups and downs of social media.

'Tayla is showing young women that you can wear glitzy gowns and rock stilettos, and you can also be a hardcore athlete who sweats and spits and kicks the footy, as well as a total dag in trackydacks with food-stains on your front.' - Patty Kinnersly, CEO of Our Watch

Tayla Harris is an AFLW player for the Carlton Football Club. She previously played for Brisbane in the inaugural AFL Women's season in 2017. She received All Australian honours two years in a row, as well as winning Mark of the Year in season 2018. She is also a professional boxer. In March 2019 Tayla was subjected to extreme online trolling when a photo showing her kicking for goal was posted to social media. She has been lauded for how she navigated the social and mainstream media storm that followed and is proud to use her platform to speak out about the issue, raising awareness around trolls and online bullying, calling out unacceptable behaviour online and inspiring young women.

Win the chance for AFLW superstar Tayla Harris to speak to six students (plus one teacher) from your school (in years 7-12) for a thirty-minute 'in-conversation' video conference! Just enter in the link below: