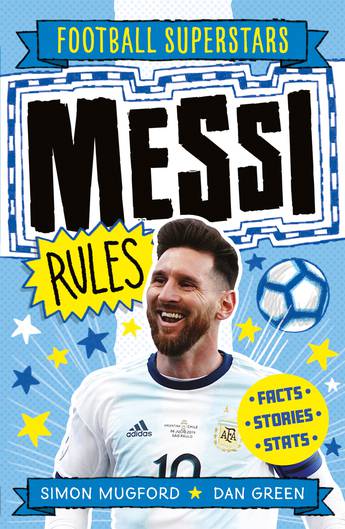 Everything the young fan wants to know about Lionel Messi, from his childhood to the present day, including lots of quizzes and facts.

Filled with quizzes, stats and little known facts, plus illustrated and told with all the fun of a Tom Gates novel, the Football Superstars series is perfect for young readers five and up.

Is Lionel Messi your ultimate football hero? Messi was the youngest player to score 50 goals in the Champions League, won the Ballon d'Or five times and once entertained the crowd by doing 1,200 keepy-uppies!

Discover how he went from being the smallest player on the field (as a young boy he was so tiny all the other players called him 'Titch') to being widely known as the 'Greatest of All Time'.

Football Superstars is a series aimed at building a love of reading from a young age, with fun cartoons, inspirational stories, a simple narrative style and a cast of characters chipping in with quotes, jokes and comments.

Find your ultimate football hero!
More books by this author More books in this series

Simon Mugford studied the history of everything at Goldsmiths College before working at the Science Museum making paper aeroplanes and setting fire to hydrogen balloons. Despite being a fully grown man, his favourite subjects include dinosaurs, robots, rockets, loud music and Star Wars. An Ipswich Town fan since they won the FA Cup in 1978 (it's true - look it up) he lives in Kent with his wife, daughter, and a cat with two names.

Dan Green has drawn silly pictures since he could hold a crayon, then he grew up and started making books about stuff like trucks, space, people's jobs, Doctor Who and Star Wars.