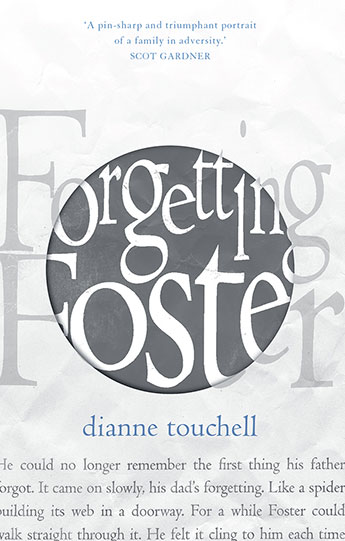 The powerful story of a young boy whose father develops Alzheimer's disease, from the highly acclaimed author of A Small Madness.

Foster suddenly recognised the feeling that rolled over him and made him feel sick. It was this: Dad was going away somewhere all on his own. And Foster was already missing him.

Foster Sumner is seven years old. He likes toy soldiers, tadpole hunting, going to school and the beach. Best of all, he likes listening to his dad's stories.

But then Foster's dad starts forgetting things. No one is too worried at first. Foster and Dad giggle about it. But the forgetting gets worse. And suddenly no one is laughing anymore.

A heartbreaking story about what it means to forget and to be forgotten.
More books by this author

Dianne Touchell was born and raised in Fremantle, Western Australia. Her debut novel Creepy & Maud (Fremantle Press) was Shortlisted for the Children's Book Council of Australia's Book of the Year Award in 2013 in the Older Readers category. Her second novel, A Small Madness, was published by Allen & Unwin in 2015. She has worked as a fry cook, a nightclub singer, a housekeeper, a bookseller and manager of a construction company. Sometimes she has time to write books for young adults, who she thinks are far more interesting than grown-ups. She lives with animals.