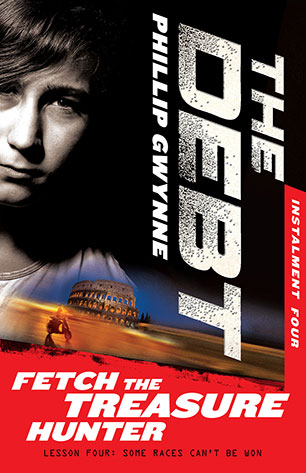 Book four of the high-octane thriller series, and this time the challenge is international! Dom has three more Herculean tasks to perform.or lose a pound of flesh. In this instalment he must find and bring home an expert underwater archaeologist from the other side of the world.

So must thou bear witness also at Rome .

Dom should not be going to Rome with the rest of the track team. He wasn't good enough. He knows it. Coach knows it. Rashid, who should be going but isn't, knows it. But it seems The Debt has other plans.

So it's not long before Dom finds himself in Italy receiving the fourth instalment. He is to find E Lee Marx, the world's greatest treasure hunter who's become a recluse following the tragic death of his nephew in a diving accident, and bring him back to the Gold Coast. It will require manipulation and deception, but Dom is fast becoming a master at both. So much so that when he's in Italy, Dom decides to do a little digging of his own. He travels to Calabria, to the very place where The Debt originated.

But the answers Dom gets only lead to more questions. One thing is certain: whatever The Debt wants, they get.