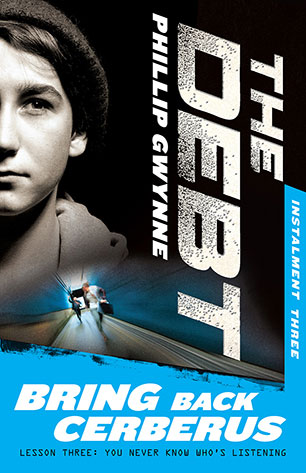 Book three of a high-octane thriller series. Dom has four more Herculean tasks to perform.or lose a pound of flesh. In this instalment he has to find a valuable and mysterious piece of technology.

Dom should be concentrating on training for his big race and a possible spot on the Australian team to compete at the World Youth Games. But the powerful, shadowy organisation, The Debt, has other ideas. And as Dom knows: you don't mess with The Debt.

The Debt has handed down the next task to repay Dom's ancient family debt, and it's seemingly impossible! Procure a Cerberus. Rumoured to be still in development, Cerberus is an innovative piece of next-generation technology, only whispered about in the furthest reaches of cyberspace. Drawn into the shady world of black-hat hacking and industrial espionage, Dom will need every skill he's learnt, and acquire some more, to complete this instalment. How do you steal something that doesn't exist? This time will he fail and lose a pound of flesh?
More books by this author More books in this series