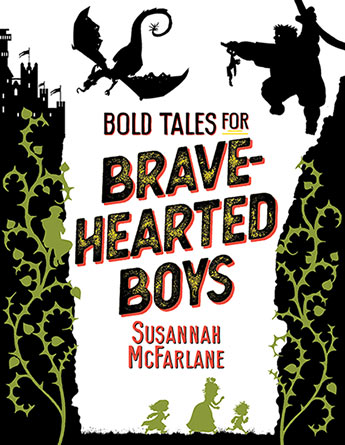 Kind is the new brave! In this companion to her bestselling Fairytales for Feisty Girls, renowned kid hero and feisty author Susannah McFarlane presents an illustrated collection of 'tilted' fairytales featuring kind boys with big hearts.

Bold: typically describes one who is willing to take risks; who is brave in heart as well as deed.

Boys can be pretty handy at dragon-felling and tower-climbing, but there is so much more to them than brawn and bravado: they have a lot to say and feel as well, as these tilted tales will tell…

Cheer along as the sometimes unexpected heroes in these retellings of Jack and the Beanstalk, Hansel and Gretel, The Emperor's New Clothes and Prince Leo and the Sleeping Princess create their own happily ever afters in this beautiful and emboldening bedtime book.

Susannah McFarlane is the author, creator and publisher of some of Australia's most successful children's book series. She is best known as the author of the bestselling EJ12 Girl Hero and EJ Spy School series, which have sold over 1 million copies. Susannah also created and co-wrote (with Louise Park, as Mac Park) the hugely popular D-Bot Squad and Boy vs Beast series; wrote the Little Mates series of alphabet books for under-fives; was series editor for Stuff Happens!, about the everyday challenges boys face; and wrote Fairytales for Feisty Girls.