Home>Browse>Books>Children's>Anders and the Comet: Anders 1

Anders and the Comet: Anders 1 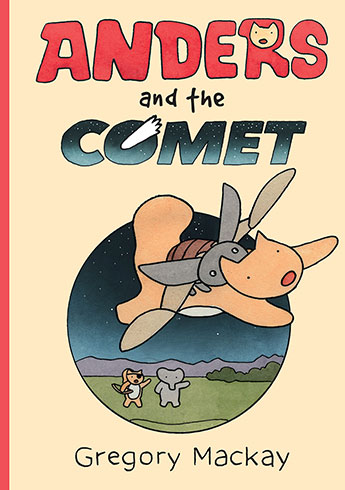 A sweet and funny story in cartoons about the adventures of Anders and his friends, which will delight fans of Peanuts and Tom Gates.

Meet Anders, Eden and their new friend, Bernie. It's the school holidays, and there are comics to be made, games to be played, ice-cream to be eaten, and rhinos to impress at Wekiwa water park.

Then Anders and his friends meet the Green Grabber and things take on a whole new twist, leading Anders to a wonderful pet, Skip, and to wild adventures - and a dramatic rescue - in the sky.

An endearing story of fun, friendship and unexpected courage.
More books by this author More books in this series

Gregory Mackay has been making comics since school. He enjoys drawing and watercolour painting. He likes drawing aeroplanes and machines, as well as building models and painting pictures. Both Anders and the Comet and Anders and the Volcano, his first books for children, have also been published in France, and have been shortlisted for the Angouleme Festival, the most prestigious comics awards in Europe, acknowledging the best comics published across the world. In 2018 Gregory undertook a six-month Australia Council for the Arts residency at the Keesing Studio at the Cite Internationale des Arts in Paris.

Graphic novels are very popular with both boys and girls of primary and secondary ages. This simple comic book would be a good introduction for younger primary students. The book has many graphic novel features such as varying number of panes per page and use of key words to tell part of the story such as “crack” and “boing”. The illustrations are in black and white which may put some readers off, especially those who only enjoy colour. The different characters do not have a variety of colours to distinguish them so the reader must pay attention to the text and the setting. The storyline is mostly told in the text. Unlike more sophisticated graphic novels, the author spells out more of the story. He doesn’t rely on the reader gaining meaning from the illustrations as much as other novels do.

If you look carefully, the issue of bullying is raised in a gentle way which allows the teacher or parent to have a discussion with a particular group of children around this issue. While hard core graphic novel readers will find this book simple, any teacher who wants to get students reading them would find this a must-have in their library and direct it to both reluctant readers and those they want to introduce a new text type to.
Roxanne Steenbergen, Windermere Primary School, TAS 7011

Who doesn't love school holidays? Anders, Eden and their friend Bernie do, and they do not waste any time getting into the fun. Anders and the Comet is a fun, easy read for young children who are beginning to read independently. This book could be a solo bedtime read for children or an in school reading group book. It is easy to read and easy to follow. Children will find the comic style different and fun as they cruise through the pages and life of Anders and his friends. The book can be used to describe to children to art of speech writing and writing in sequence. From this book many lessons arise such as speech in writing, ordering the sequence of the story starting with pictures and moving to words only. Children can also make and create their own comics based on their holidays, following the school rules or a story. I love this easy to follow read of Anders and the Comet and would recommend this book for children to gain confidence by reading a ‘big chapter book’ individually.Stacey Lamb, St Bernard’s Primary School, Wangaratta VIC 3672

Anders and the Comet is the story of three animal friends and their adventures during the school holidays. Presented in a comic style format, the story picks up pace in the middle with the trio launched into a tricky situation that has an imaginative solution. I asked my niece and nephew to read it to see what the target reading age was and it appealed more to my younger niece who is in 1st/2nd class. The illustrations are black and white and are simply drawn with easy to read dialogue between the characters. Each of the early chapters end with a picture which encourages the reader to predict what might come next and is a good feature to maintain the flow of the story which at times can be too loaded with more mundane everyday events which do not enhance the story. This style of book is more suited to individual reading where the detail of the frames can be appreciated although individual pages would be worth studying from the perspective of story sequencing, visual literacy elements and of course cartooning. Reluctant readers would feel confident with this book and those interested in science and the universe would relate well to the topic of the comet discovery. There are many themes and genres presented in this story and at times I was not sure why. There was a bullying scenario presented initially which was never developed or resolved, using words the target audience would react to which I don’t think were necessary and would turn many readers (and parents) off. This did not hook my 10 year old nephew in, he said he didn’t ‘get it’ and needed encouragement to persevere, agreeing that the story was much better at the end.Fiona Deppeler, Balgowlah Heights Public School NSW 2093

Anders and the Comet is such a funny, sweet and endearing story of friendship, creativity and imagination. As soon as I showed the book to the class, the children were interested in the picture of the very cute dog flying high above his friends. The book is all about an amazing school holiday that has so much excitement and adventures, especially as Anders and his friends are never bored. Anders and his friends get busy building forts, hanging out together and having very unexpected encounters with the "Green Gabber" in the nearby woods. This only adds to the fun of this story. Anders and the Comet is very well written and very funny details about space and flying are very well described in the story. I believe this helps with painting a great picture for the children of all the adventures and endless possibilities happening within the story. I would recommend this very clever story for children aged 5 and up as the class I read this book to is in kindergarten. The story was read during mat time so a few pages were read each day. I was also surprised how the black and white comic book illustrations captured Anders and his friends’ holiday fun.

Because this story is so much fun, as a class we made our own adventure stories and made a poster that had a short sentence to start off the class discussions - 'If I could do anything, I would...' The answers were amazing as we had circus trainers, shark divers, astronauts, pirates and princesses'. Anders and the Comet is a book that will capture the imagination of all its readers.
Claire Evans, Palmwoods Kindergarten

This is a delightful graphic novel that would ideally be suited to children aged 6-9. The story focuses on the themes of friendship and adventure, told in a comic strip format that will be popular with reluctant readers in particular. Children will be able to relate their own school holiday adventures with those in the book, such as playing games with friends and making cubbies.

This book would make a good read-aloud from Grades 1-4, providing teachers make sure to stop and give students the opportunity to also read the graphics on each page. Students would also enjoy reading this during silent reading time or by sharing the book with a partner. Partners would be able to practise their expression when reading this book, taking on the parts of the different characters in the story.

It is a perfect book for beginning readers as the author takes time to develop the plot and it moves at a slower pace compared to graphic novels for older children, such as Diary of a Wimpy Kid. There also isn’t too much text for children to attend to on each page, making the book an achievable and enjoyable read for younger students. The vocabulary used is suitable for this age group and students will be able to make predictions about the text, given their familiarity with the themes of friendship, adventure and holidays.

This book would appeal to young students, particularly boys, who have enjoyed other graphic novels such as the Big Nate series. Teachers do need to note it includes the words fart and dummy, in case these might be considered inappropriate words for any particular age group.
Kathleen Temple, Yarrambat Primary School

How to draw Anders