The waves of memory 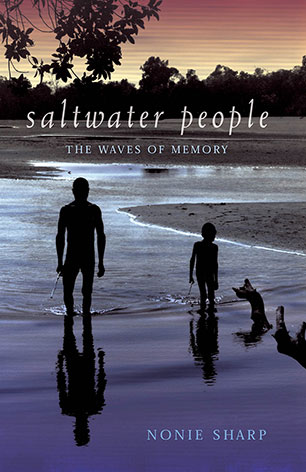 A fascinating insight into the culture of the saltwater peoples of northern Australian coasts, their profound knowledge of and attachment to their sea country, how this endured despite dislocation and repression, and how this has shaped their values and relations with territory - with telling contrasts to our own western institutions and their origins.

This book plunges the reader into the unique and vibrant sea worlds of the peoples of northern Australia. We come to learn how profoundly these saltwater people know their bountiful waters and shores, which to them are the sacred endowment of ancestor spirits to their clans - not only as a source of livelihood but of identity, cultural memory, community and spirituality.

In contrast, in western tradition, the sea, unlike the land, cannot be owned - the notion of freedom of the seas has for centuries been a cornerstone of sea law.

In Saltwater People, Nonie Sharp crosses between traditions to discover telling differences and surprising points of contact, illustrating how radically different attitudes maybe about the relationships of peoples to their 'territory'. Sharp's comparative approach touches on both historical and contemporary cases as far afield as Scandinavia, the US, Canada, New Zealand, offering fresh insight into issues of indigenous heritage; land and sea rights; public, private and common property; and environment. Her lively study compels non-indigenous readers to reflect on the origins of their own institutionalised rights to natural resources, and the wisdom each tradition may have for the other.
More books by this author

Nonie Sharp has worked with northern Australia's indigenous coastal peoples for nearly 25 years. After obtaining her PhD in 1985, she taught sociology and anthropology at La Trobe University, Melbourne. A five-year Australian Research Fellowship enabled her to travel to Pacific islands, parts of coastal Europe, Canada and the US, and to write a book about people whose ties to the sea pervade their lives.

Nonie Sharp is also the author of No Ordinary Judgement, the story of the landmark Australian Mabo case on indigenous land rights, a book shortlisted in 1996 for the Australian Cultural Studies Prize and for the New South Wales Premier's Literary Awards. Other books include Footprints Along the Cape York Sandbeaches (1992), shortlisted for the Victorian Premier's Literary Awards, and Stars of Tagai (1993). She has also published widely in journals, magazines and edited collections, especially in the Melbourne-based serial Arena.

1 Two traditions of the sea

7 Freedom of the seas