The Extraordinary Rise and Surprising Appeal of Living Alone 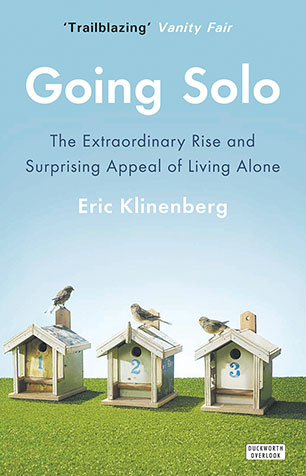 'Klinenberg . fleshes out [his] subjects with expertise and devotion' The New York Times

'A book so important that it is likely to become both a popular read and a social science classic . This book really will change the lives of people who live solo, and everyone else . Thorough, balanced, and persuasive' Psychology Today

In 1950, only 22% of adults were single. Today, more than 50% of adults are. Eric Klinenberg explores the dramatic rise of solo living, and the seismic impact it's having on our culture, business and politics.

Though conventional wisdom tells us that living by oneself leads to loneliness and isolation, most 'solo dwellers', compared with their married counterparts, are more likely to eat out and exercise, sign up for art and music classes, attend public events and lectures, and volunteer.

Drawing on over three hundred in-depth interviews with men and women of all ages and every class, Klinenberg reaches some startling conclusions. With eye-opening statistics, original data and vivid portraits of people who go it alone, Going Solo upends common preconceptions to provide the definitive take on the rise of this major trend and how it is transforming modern society.
More books by this author

Eric Klinenberg is Professor of Sociology, Public Policy and Media, Culture and Communications at New York University, and editor of the journal Public Culture. He has also contributed to popular publications such as The New York Times Magazine, Rolling Stone, TIME magazine and the Guardian.