The Intellectuals and the Masses

Pride and Prejudice Among the Literary Intelligentsia 1880-1939 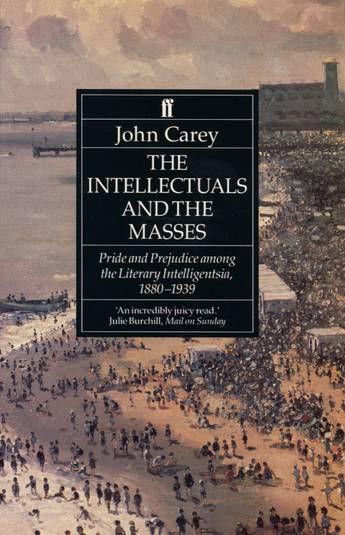 Download cover
Availability: Not available to order from this website, please try another retailer
Professor John Carey shows how early twentieth-century intellectuals imagined the 'masses' as semi-human swarms, drugged by popular newspapers and cinema, and ripe for extermination. Exposing the revulsion from common humanity in George Bernard Shaw, Ezra Pound, D. H. Lawrence, E. M. Forster, Virginia Woolf, H. G. Wells, Aldous Huxley, W. B. Yeats and other canonized writers, he relates this to the cult of the Nietzschean Superman, which found its ultimate exponent in Hitler.Carey's assault on the founders of modern culture caused consternation throughout the artistic and academic establishments when it was first published in 1992.
More books by this author

John Carey is Merton Professor of English at Oxford University, a distinguished critic, reviewer and broadcaster, and the author of several books, including studies of Donne, Dickens and Thackeray, and most recently, Pure Pleasure: A Guide to the Twentieth Century's Most Enjoyable Books, described, by James Wood in the London Review of Books, as 'likeable, wise and often right . . . one feels an attractive sense of partisanship in Carey's writing, an alliance with the ordinary, the plain spoken, the unlettered, the sympathetic and the humane. Carey writes with an Orwellian attention to decency'. He is a regular critic on BBC2's Newsnight Review. He is also the editor of the best-selling anthologies The Faber Book of Reportage, The Faber Book of Science and The Faber Book of Utopias.